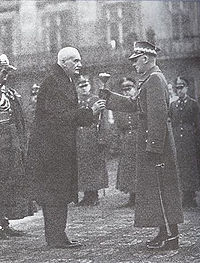 Marshal of Poland (Marszałek Polski) is the highest rank in the Polish Army. It has been granted to only six officers. At present, this rank is equivalent to a Field Marshal or General of the Army (OF-10) in other NATO armies.

There are today no living Marshals of Poland, since this rank is bestowed only on military commanders who have achieved victory in war. Recently, however, the rank of four-star with modernized name Generał has been introduced, and on August 15, 2002, was granted to Czesław Piątas, at present civilian, former Chief of the General Staff of the Armed Forces of Poland.

In all, the following persons have served as Marshals of Poland.

Soldiers of the LWP (Polish People's Army) with Marshal-of-Poland rank:

Wojciech Jaruzelski, despite colleagues' encouragement in the 1980s, declined promotion to Marshal of Poland (most likely because of Marian Spychalski).