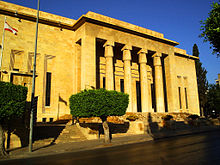 The National Museum of Beirut (Arabic: متحف بيروت الوطنيّ‎) is the principal museum of archaeology in Lebanon. The collection was begun after World War I, and the museum was officially opened in 1942. The museum has collections totalling about 100,000 objects, most of which are antiquities and medieval finds from excavations undertaken by the Directorate General of Antiquities. About 1300 artifacts are exhibited, ranging in date from prehistoric times to the medieval Mamluk period.

During the 1975 Lebanese Civil War, the museum stood on the front line that separated the warring factions. The museum's Egyptian Revival building and its collection suffered extensive damage in the war, but most of the artifacts were saved by last-minute pre-emptive measures.
Today, after a major renovation, the National Museum of Beirut has regained its former position, especially as a leading collector for ancient Phoenician objects. 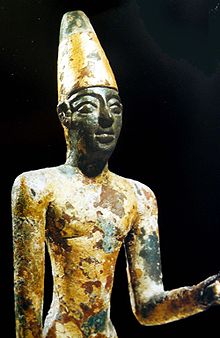 In 1919, a small group of ancient artifacts collected by Raymond Weill, a French officer stationed in Lebanon, was exhibited at a provisional museum in the German Deaconess's building in Georges Picot Street, Beirut.[3][4] Meanwhile, a forerunner of the Archaeological and Fine Arts Service began to assemble items from the region round Beirut. The initial collection was rapidly expanded under successive antiquity directors with the addition of finds from the excavations led by Dr. Georges Contenau at Saida and Ernest Renan at Saida, Tyre[5] and Byblos.[6] Donations of private collections[5] included those of Henry Seyrig’s coin collection,[7] General Weygand in 1925[5] and Dr George Ford, the Director of the American Mission School of Sidon, in 1930.[5]

In 1923, the "Friends of the Museum Committee",[8] headed by Bechara El Khoury, then Prime Minister and minister of education and fine arts, was created to raise funds to build a national museum.[3][4] The funding committee included: Alfred Sursok, Marios Hanimoglo, Albert Bassoul, Omar Daouk, Kamil Eddeh, Ali Jumblat, Henry Pharaoun, George Faissy, Assad Younes, Hassan Makhzoumi, Joseph Farahi, George Korom, Jean Debs, Wafik Beydoun and Jack Tabet. The committee accepted the plans presented by architects Antoine Nahas and Pierre Leprince-Ringuet. Construction began in 1930 on a plot of land donated by the municipality near the Beirut Hippodrome, and was completed in 1937.[3][4] The opening of the museum was scheduled for 1938, but was postponed because of the political situation in the lead-up to World War II.[8] The National Museum of Beirut was finally opened on May 27, 1942 by President Alfred Naqqache.[3][4] Until 1928, the conservation of the Lebanese National Museum was put in the hands of Charles Virolleaud, the director of the service of antiquities and Philippe de Tarazzi, the Lebanese conservator of the National Library. The collection continued to grow under the direction of Mir Maurice Chehab, head curator for 33 years,[8][9] until the start of the Lebanese Civil War in 1975.[4] 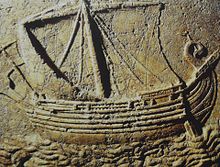 In 1975, with the outbreak of the Lebanese war, Beirut was split into two opposing areas. The national museum and the directorate general of antiquities were on the demarcation line known as “Museum alley” which separated the warring militias and armies.[4][10] Conditions in the immediate vicinity of the museum rapidly worsened,[10] as the museum endured shelling and bombing, and was turned into a barracks for combatants.[4][11] "Museum alley" became a checkpoint controlled by various Lebanese militias, or the Syrian or Israeli armies, who opened and closed the road under short-lived truces.[11][12] The authorities decided to close the museum. The first protective measures inside the museum were initiated by Mir Maurice Chehab and his wife[13][14] during alternating fire-fights and moments of truce. The vulnerable small artifacts were removed from their showcases and hidden in storerooms in the basement, which was then walled up, banning any access to the lower floors. On the ground floor, mosaics which had been installed in the floor were covered with a layer of concrete. Statues and sarcophagi were protected by sandbags. When the situation reached its worst in 1982, the heavier artifacts were encased in wood and concrete.[4][15]

When the final cease-fire was declared in 1991, the museum and the Directorate General of Antiquities were in a state of near-destruction. The museum was flooded with rainwater and the outer facade was badly marked by bullets and craters from shells. Militiamen who occupied the premises had covered the internal walls with graffiti. The state of the museum collection was also very serious: the small objects had been left in the storerooms for more than fifteen years in a totally inappropriate environment. The national museum had been built on a high water table, which caused a dangerous increase in humidity, and collection of water inside the storerooms. The large stone artifacts has been left in their emergency casings without any ventilation and traces of corrosion from salts were visible on the lower edges of the stone monuments. The wing adjacent to the Directorate General of Antiquities was devastated by shells which started a fire, destroying documents such as maps, photographs, and records, as well as 45 boxes containing archaeological objects. All of the laboratory equipment was lost.[3][4] During the war, some items were looted and are now exhibited in Turkish museums, whilst others have been auctioned. Ironically, these had been stolen from external stores, mainly in Byblos and Sidon, in which they were kept to avoid damage and looting.[16][17] 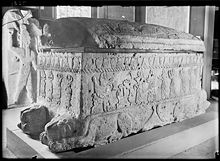 The first plans to restore the national museum came in 1992 from Michel Edde, then Minister of Culture and Higher Education. The proposal to tear down the concrete walls and cases which protected the national treasures was turned down by the general director of antiquities, Camille Asmar, since the museum still had no doors or windows to prevent further looting. Ghassan Tueni donated the funds for the museum's massive new main door. Once the doors and windows were put in, the decision was made to pull down the concrete wall that protected the entrance to the basement.[14] Restoration work started in 1995 and focused on the building itself, and the inventorying and restoration of the collection.[4] The museum was officially inaugurated on November 25, 1997 by then president Elias Hrawi but only parts of the ground floor and basement were made accessible since the remainder of the building was still under repair and important modifications were needed to meet the requirements of modern museology standards. The museum was again closed to the public in July 1998 to achieve restoration works.[3] On October 8, 1999, the museum re-opened its doors to the public under the patronage of president Emile Lahoud.[3][4]

The rehabilitation of the National Museum was undertaken by the Ministry of Culture, the Directorate General of Antiquities and the National Heritage Foundation,[4][18] to the plans of the French architect, urban planner and designer Jean-Michel Wilmotte.[19] In 1999 the Lebanese government started a massive campaign to recover antiquities that were stolen or traded during the civil war.[20] Many artifacts were recovered from warehouses or private homes since Lebanese law dictates that any item more than 300 years old belongs to the state.[21]

Opening of the basement floor was scheduled for November 2010[22], but as of June 2011, only the ground and first floors are open to the public.[23]

The museum was designed in a French inspired[24] Egyptian Revival style by the architects Antoine Nahas and Pierre Leprince Ringuet, and built with Lebanese ochre limestone. It comprises a basement, a ground floor, a mezzanine floor and a terrace; the central block is covered by a glass roof, above the mezzanine, giving natural overhead light.

The National Museum of Beirut currently exhibits 1300 artifacts from its collection of approximately 100,000 objects.[25] The museum displays follow a chronological circuit beginning in Prehistory and ending in the Ottoman era. The circuit begins on the ground floor where 83 large objects are displayed, these include sarcophagi, mosaics statues and reliefs. The upper floor displays 1243 small and medium-sized artifacts arranged by chronological order and by theme in modern showcases with soft lighting and magnifying glasses that emphasize the aesthetic aspect of the artifacts.[3]

The collection has prehistoric artifacts from early hunter-gatherer societies[7] ranging from the Lower Paleolithic (1M.-150.000 BC) to the Neolithic (9000–3200 BC), typically spearheads, flints, hooks and pottery.[26] These were found in caves and rock shelters all over Lebanese territory.[26] Around five hundred prehistoric sites have been surveyed in Lebanon as a whole, and around fifty sites in Beirut itself.[7]

The Bronze Age (3200–1200 BC) saw the birth of Lebanon's first fortified villages, the development of commercial and maritime activities and the invention of the world's first alphabet in Byblos.[26] This collection includes the Museum's masterpiece: the sarcophagus of Ahiram, which holds the oldest text written in the Phoenician alphabet.[27] 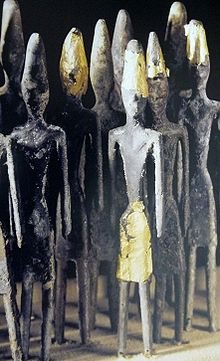 The Iron Age (1200 – 333 BC) in Lebanon saw the climax of the Phoenician civilization, which culminated in its maritime expansion and the transmission to other cultures of the alphabet (which was attributed by the Greek legend to the Tyrian Cadmus). During this period, after an era of autonomy, the city-states of the area came under Assyrian, Babylonian and Persian hegemony. The occupying civilizations inflenced Phoenician ceramics, jewelry and ivory work, statues, and sarcophagi.[26]

Key highlights of the collections include:

The Hellenistic period (333 – 64 BC) In 333 BC, the decisive victory won by Alexander the Great over the Persian king Darius III opened Phoenicia to the Greek conqueror.

After Alexander's death, Phoenicia first came under Ptolemaic rule from Egypt, then, after the Battle of Panium, under the Seleucids based in modern Iraq. The Seleucids abolished local monarchies, and appointed governors (bearing Greek names) to rule the Phoenician cities.

Greek influence, which had made its way to Phoenicia during the Persian period, now became stronger. Figurines found in Kharayeb show Aegean influence on local craftsmen. This spreading Hellenization interacted with the local Semitic population substratum, which remained faithful to its gods and its language. It resulted in an artistic and architectural symbiosis best illustrated in the artifacts of Umm el 'Amed and Bustan esh Sheikh. 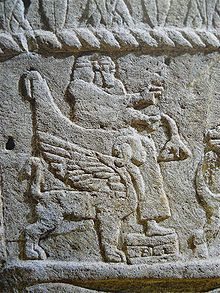 In 64 BC, the military expedition of the Roman general Pompey put an end to the anarchy prevailing in the Seleucid Empire, and Phoenicia became part of the Roman world. But Roman civil wars continued to disrupt the region until 31 BC, after which, with the reign of Augustus, the pax romana extended over the area. The pax romana favored international trade, and local industries in silversmithing, glass, textiles and ceramics developed.

After the death of Theodosius I in 395 AD, the Roman Empire was divided into a western and an eastern empire. The Lebanese cities were attached to the latter, and converted to Christianity which became the state religion in 392. The emperor ordered the destruction of pagan temples, but cults like those of Adonis and Jupiter Heliopolitanus were kept alive by the local population and survived in some form for centuries.

The Arab conquest of Lebanon was completed in 637 AD. The expansion of the coastal cities, which had slowed down after earthquakes in the 6th century, revived during the Umayyad period. Their harbors and shipyards showed renewed activity, and the hinterland saw extensive irrigation work for agriculture.

Lebanon was directly affected by the various dynastic changes which brought to power successively the Umayyads, Abbasids, Fatimids, Seljuks, Ayyubids and Mamluks. During this long period, Islam spread and Arabic became the language of the administration, then progressively replaced local dialects among the population. Artifacts from the Mamluk period (636 – 1516 AD) include coins, gold jewelry, and glazed terracotta bowls.[26]

Maurice Chehab initiated in 1936 the museum's first publication, the Bulletin du Musée de Beyrouth ("Beirut Museum Bulletin"), which reached 36 volumes before publication was stopped in 1986 by the civil war.[7] The journal covered archaeological finds, sites and ancient civilizations.[29] In 1995 the Museum and the Lebanese British Friends of the National Museum foundation resumed publication of a bi-annual journal entitled Archaeology and History in Lebanon (ISSN 1475-5564).[30] BAAL ("Bulletin d’Archéologie et d’Architecture Libanaise" – Lebanese Archaeology and Architecture Bulletin) is an annual journal issued by the Directorate General of Antiquities in cooperation with the Lebanese Ministry of Culture in keeping in the tradition of the Beirut Museum Bulletin. The first volume of BAAL was issued in 1996; the journal publishes research papers, excavations and archaeological surveys and reports.[31]