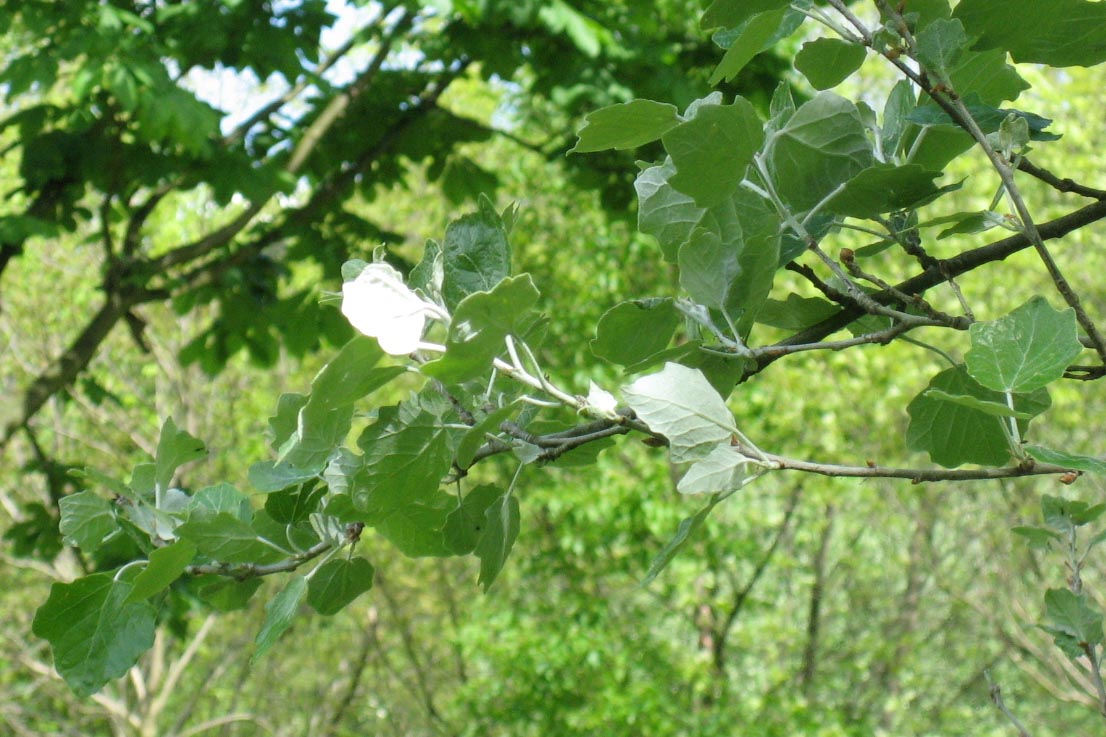 "Populus alba" (White Poplar) is a species of , most closely related to the s ("Populus" sect. "Populus"). It is native from and through central (north to and ) to central . It grows in moist sites, often by watersides, in regions with hot summers and cold to mild winters.

It is a medium-sized , growing to heights of up to 16-27 m (rarely more), with a trunk up to 1 m diameter and a broad rounded crown. The is smooth and greenish-white to greyish-white with characteristic diamond-shaped dark marks on young trees, becoming blackish and fissured at the base of old trees. The young shoots are covered with whitish-grey down, including the small buds. The leaves are 4-15 cm long, five-lobed, with a thick covering of white scurfy down on both sides but thicker underneath; this layer wears off the upper side but not the lower, which stays white until autumn leaf fall. Larger, deeply lobed leaves are produced on fast-growing young trees, and smaller, less deeply lobed leaves on older, slow-growing trees. The s are s up to 8 cm long, produced in early spring; they are dioecious, with male and female catkins on separate trees; the male catkins are grey with conspicuous dark red stamens, the female catkins are greyish-green. The female catkins lengthen to 8–10 cm after pollination, with several green seed capsules, maturing in late spring to early summer. It also propagates by means of root suckers growing from the lateral roots, often as far as 20-30 m from the trunk, to form extensive clonal colonies.

White Poplar hybridises with the closely related Common Aspen ""; the resulting hybrid, known as Grey Poplar ("Populus × canescens"), is intermediate between its parents, with a thin grey downy coating on the leaves, which are also much less deeply lobed than White Poplar leaves. It is a very vigorous tree with marked hybrid vigour, reaching 40 m tall and over 1.5 m trunk diameter (much larger than either of its parents). Most Grey Poplars in cultivation are male, but female clones are occasionally found.

It requires abundant light and ample moisture, and stands up well to flood water and slightly acidic soils. Its green-and-white leaves makes it an effective but the root suckers may cause problems in some situations. It is very attractive as an open-grown tree in water meadows, and, because of its extensive root system and tolerance of salt, is also planted to strengthen coastal s.

The majority of White Poplars in cultivation in northern Europe are female trees.

It has been introduced into North America, especially along the east coast. It is a highly competitive tree and was the most common introduced tree species on .

In intensive forest management it is being replaced by various hybrids. The wood is soft, and used to make cellulose and for cheap boxes.

An old English name "Abele", now rarely used, is derived from the "albellus", white, by way of "aubel" and name "abeel".

According to ancient mythology the White Poplar was consecrated to because he destroyed in a cavern adjoining the , which was covered with these trees; and in the moment of his triumph he bound his brows with a branch of White Poplar as a token of his victory. Persons offering sacrifices to Hercules were always crowned with branches of this tree; and all who had gloriously conquered their enemies in battle wore garlands of it, in imitation of Hercules. in the "Iliad" compares the fall of when killed by Ajax to that of a poplar. quote|So falls a poplar that on watery ground
Raised high its head with stately branches crowned.

mentions that Paris had carved the name of Ænone on a poplar, as Shakespeare has Orlando carve the name of Rosalind upon the trees of the forest of Arden.

gives directions for the culture of this tree and speaks of the White Poplar as delighting to grow on the banks of rivers.