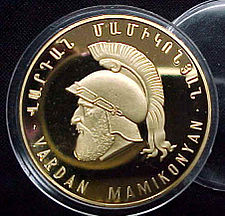 Mamikonian, Mamikoneans, or Mamigonian (Armenian: Մամիկոնյան) was a noble family which dominated Armenian politics between the 4th and 8th century. They ruled the Armenian regions of Taron, Sasun, Bagrevand and others. Their patron saint was Saint Yovhannes Karapet (John the Baptist) whose monastery of the same name (also known as Glak) they fiercely defended against the Sassanid invaders.[1] 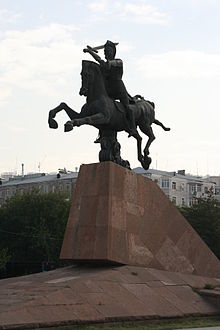 The statue of Vartan Mamikonian in Yerevan, Armenia

The origin of the Mamikonians is shrouded in the mists of antiquity. Moses of Chorene in his History of Armenia (5th century) claims that three centuries earlier two Chinese noblemen, Mamik and Konak, rose against their half-brother, Chenbakur, the Emperor of Chenk, or China. They were defeated and fled to the king of Parthia who, braving the Emperor's demands to extradite the culprits, sent them to live in Armenia, where Mamik became the progenitor of the Mamikonians.

Another 5th-century Armenian historian, Faustus of Byzantium, seconded the story. In his History of Armenia, he twice mentions that the Mamikonians descended from the Han Dynasty of China and as such were not inferior to the Arshakid rulers of Armenia. This genealogical legend may have been part of the Mamikonians' political agenda, as it served to add prestige to their name. Although it echoes the Bagratids' claim of Davidic descent and the Artsruni's claim of the royal Assyrian ancestry, some Armenian historians tended to interpret it as something more than a piece of genealogical mythology.[2] A theory from the 1920s postulated that the Chenk mentioned in the Armenian sources were not the Chinese but probably from a different ethnic group from Transoxania, such as the Tocharians.[2] Edward Gibbon in his The History of the Decline and Fall of the Roman Empire also believed that the founder of Mamikonian clan was not Chinese but merely from the territory of the Chinese Empire and ascribes a Scythian origin to Mamgon stating that at the time the borders of the Chinese Empire reached as far West as Sogdiana.[3]

Another reconstruction, similar to the previous ones but without references whatsoever to distant China, has that the family originally immigrated from Bactriana (present northern Afghanistan) under the reign of Tiridates II of Armenia,[4] likely coinciding with the accession of the Sassanids in Iran.

Today, historians are generally of the opinion[citation needed] that the Mamikonians were probably descended from chieftains of the Tzans (Chanik - Ճանիք/Ճենիք - in medieval Armenian, Tzannoi in medieval Greek). The Tzans[5] were a tribe that once inhabited a mountainous region to the south of Trebizond, also known as Chan (modern day Georgians and Laz). They postulate that the tradition of the Chinese origin arose out of the similarity of the name Chanik to the Armenian word for China, Chen-k.[6]

Recently, a Chinese historian introduce one theory about Chinese origin of the Mamikonians. According to his theory, the Mamikonians' ancestor is a relative of general Ma Chao. This relative successfully escaped the purge of Cao Cao on Ma family and fled to Persia, then to Armenia. In 2005, in an interview with the Xinhua News Agency journalists, Suri Mamikonian, vice-president of Friendship Association of Mamikonian family, said that his family name actually is the Ma surname of China, and his ancestors came from China. How ever Suri do not know exactly who his ancestor is.[7]

The Expansion of the House of Mamikonian.

The first known Mamikonid lord, or nakharar, about whom anything certain is known was a certain Vatche Mamikonian (fl. 330-339). The family reappears in chronicles in 355, when the bulk of their lands lay in Tayk. At that point the family chief was Vassak Mamikonian, a commander-in-chief (sparapet) of Armenia. Later, the office of sparapet would become hereditary possession of the Mamikonians. Vassak Mamikonian was in charge of the Armenian defense against Persia but was eventually defeated through the treachery of Marujan Ardzruni (c. 367-368).

Following that defeat, Vassak's brother Vahan Mamikonian and multiple other feudal lords defected to the Persian side. The Emperor Valens, however, interfered in Armenian affairs and had the office of sparapet bestowed on Vassak's son Mushegh Mamikonian in 370. Four years later Varazdat, a new king, confirmed Musel in office. The latter was subsequently assassinated on behest of Sembat Saharuni who replaced him as sparapet of Armenia.

On this event, the family leadership passed to Mushegh's brother, Enmanuel Mamikonian, who had been formerly kept as a hostage in Persia. The Mamikonids at once broke into insurrection and routed Varazdat and Saharuni at Karin. Enmanuel, together with his sons Hemaiak and Artches, took the king prisoner and put him in a fortress, whence Varazdat escaped abroad. Zarmandukht, the widow of Varazdat's predecessor, was then proclaimed queen. Enmanuel came to an agreement with the powerful Sassanids, pledging his loyalty in recompense for their respect of the Armenian autonomy and laws.

Upon the queen's demise in 384, Enmanuel Mamikonian was proclaimed Regent of Armenia pending the minority of her son Arsaces III and had the infant king married to his daughter Vardandukh. It was Enmanuel's death in 385 that precipitated the country's conquest by the Persians in 386-387. 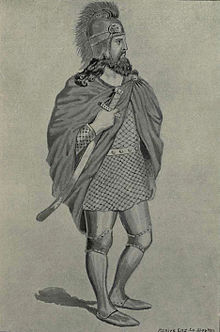 Hamazasp Mamikonian was recorded as the family leader in 393. His wife is known to have been Sahakanoush, daughter of Saint Sahak the Great and descendant of the Arsacid kings. They had a son, Saint Vartan Mamikonian, who is revered as one of the greatest military and spiritual leaders of ancient Armenia.

After Vartan became Sparapet in 432, the Persians summoned him to Ctesiphon. Upon his return home in 450, Vartan repudiated the Persian religion and instigated a great Armenian rebellion against their Sassanian overlords. Although he died in the doomed Battle of Avarayr also known as Battle of Vartanantz (451), the continued insurrection led by Vahan Mamikonian, the son of Vartan's brother, resulted in the restoration of Armenian autonomy with the Nvarsak Treaty (484), thus guaranteeing the survival of Armenian statehood in later centuries. Saint Vartan is commemorated by many churches in Armenia and an equestrian statue in Yerevan.

After the country's subjugation by the Persians, Mamikonians sided with the Roman Empire, with many family members entering Byzantine service. Not only did they rise to the highest offices of Constantinople, but even some of the emperors - conceivably Leo the Armenian and Basil I - could have been their descendants. Theodora the Byzantine regent and her brothers Bardas and Petronas the Patrician were also of Mamikonian heritage. Unsurprisingly, Mamikonians form a crucial link in the postulated descent of modern European nobility from antiquity.

The history of Mamikonians in the Early Middle Ages is quite obscure. In the period between 655 and 750 they are not documented at all. What follows below is their reconstructed genealogy between the 5th and 7th centuries. 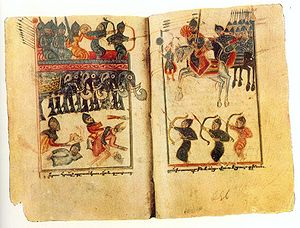 Vardan Mamikonian leading Armenians in the Battle of Vartanantz (451).

By 750, Mamikonians lost Taron, Khelat, and Mouch to the Bagratuni family. In the 770s the family was led by Artavizd Mamikonian, then by Musel IV (+772) and by Samuel II. The latter married his daughter to Smbat VII Bagratuni, Constable of Armenia. His grandson Smbat Msaker ("the Carnivore") became forefather of Bagratid rulers of Armenia and Taron.

Mamikonians are known to have led a national rebellion against the Arab Caliphate in 774-775. After the rebels were rooted out, Mamikonians' supremacy in Armenia came to an end. Even in their homeland of Tayk, they were succeeded by the Bagratids. One Kurdik Mamikonian was recorded as ruling Sasun ca. 800. Half a century later, Grigor Mamikonian lost Bagrevand to the Muslims, reconquered it in the early 860s and then lost it to the Bagratids for good. After that, Mamikonians pass out of history.

After their disastrous uprising of 774, some of the Mamikonian princes moved to the Georgian lands. The latter-day Georgian feudal houses of the Liparitids-Orbeliani and Tumanishvili are sometimes surmised to have been descended from those princes.[9]

The necropolis of the Mamikonian family was at the 4th century Saint Karapet Monastery (also known as the monastery of Glak) in the mountains directly northwest of the plain of Mush in Taron.

Cyril Toumanoff, (en) Studies in Christian Caucasian History (Georgetown University Press, 1963), pp. 209; 211—212, n. 238.
The Princes Mamikonian (the Mamikonids) claimed descent from the Emperors of China and bore the gentilitial title of Chenbakur, but appear to have been the immemorial dynasts of Tayk', on the Armeno-Georgian confines, possibly of Georgian origin; at any rate, the Mamikonid onomastics, and the dynastic patronymic in the first place, betray a Georgian connexion (Cyril Toumanoff, Studies in Christian Caucasian History, p. 209).
The imperial Chinese origin of the Mamikonids is asserted by Faustus, 5.4, 37, Sebēos, 2, and by Ps. Moses, 2.81, the latter two indicating that the title borne by their imperial ancestors was čen-bakur. The first element of that title is the ethnicon 'Chinese', the second, a rendering of the Iranian bağpūr, itself a translation of the Chinese Imperial title of t’ien-tzu ('Son of Heaven'): Markwart, Streifzüge 133—134; Süd-armenien 77-78 (the thought, however, that it was the King of the Kushans, who also entitled himself 'Son of Heaven' [devaputra], and not the Emperor of China who was meant here); Justi, Namenbuch 240. Actually, the Georgian origin of the Mamikonids seems more likely. In the first place, they were dynasts of the proto-Caucasian and half-Georgian Tayk'; in the second, there are philological data to support it. The basic element of their nomen gentilicium and most likely their gentilitial title, mamik or mamak, is a composite of the Armenian diminutive suffix -ik/-ak and the Georgian word mama or 'father': Adontz, Armenija 402—403, 405. Also, the praenomen Mušeł, found among them, is a Georgian territorial epithet, formed with the addition of the Georgian suffix -el (Armenianized as -eł) to the name of the chief city of Tarawn, Muš: Adontz, op. cit. 398; Markwart, Süd-armenien 157 n. 1. Adontz explained the Chinese tradition by a confusion, prompted by the love of exotic origins, between the ethnicon čen and that of the Georgian Čan-ians (Tzanni) or Lazi (for whom, see I at n. 55; Gugushvili, Division 56, 64), who were settled in the neighbourhood of Tayk'. … The two Mamikonid princely Houses of Georgia and the Russian Empire are the Liparitids and the T’umanids. The former appeared in Iberia c. 876; was invested with the office of High Constable of Georgia; returned, in the main branch, to Armenia in 1177, or possibly even earlier; and reigned as the Third Dynasty of Siunia [25] from c. 1200 to the mid-fifteenth century. It was subdivided, in the remaining Georgian branch, into the following houses: Jambakur(ian) [= čenbakur]-Orbeliani, Barat’ašvili, Solağašvili, Kaxaberije-Čiĵavaje, and possibly Abašije. … The other house of T’umanids, removed to Georgia from Armenia-in-Exille (Cilicia) after the twelfth century: Fifteenth Cent. Bagr. 179 n. 59; Spiski 83-85; Dolgorukov III 483; GHA(f) 2 (1953) 471; cf. Zacharias the Deacon, Sofis 48. (Cyril Toumanoff, Studies in Christian Caucasian History, p. 211—212, n. 238).