A national university is generally a university created or run by a government, but which at the same time operates autonomously without direct oversight or control by the state. Some national universities are closely associated with national cultural or political aspirations. For example, the National University of Ireland in the early days of Irish independence collected a large amount of information on the Irish language and Irish culture. In Argentina, the national universities are the result of the 1918 Argentine university revolution and its subsequent reforms, which sought a more equal and secular higher education system without clerical or government influence by bestowing self government on the institutions. 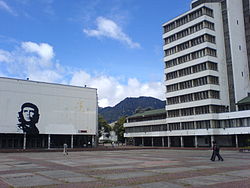 The National University of Colombia, at the Francisco de Paula Santander square.