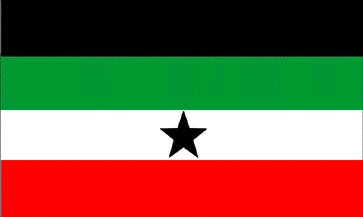 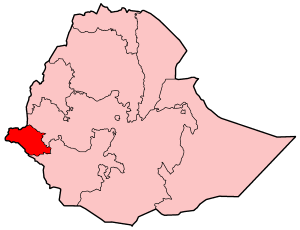 Gambela is one of the nine ethnic divisions ("") of . Previously known as Region 12, its capital is Gambela. Lying between the Baro and s, the western part of Gambela includes the .

Located in Gambela is , which covers approximately 5061 square kilometers or 19.6% of the Region's territory.

Gambela is the historic home of the indigenous Anuak. In recent years there has been significant violence between the Anuak and more recently arrived Ethiopians, who are generally referred to as "Highlanders".

The CSA reported that for 2004-2005 3,734 tons of coffee were produced in Gambela, based on inspection records from the Ethiopian Coffee and Tea authority. This represents 1.64% of the total production in Ethiopia. The CSA could not provide livestock estimates for Gambela. [CSA 2005 National Statistics, Table D.2.] In a 26 May 2000 report, the observed that at the time was a major problem in cattle for this Region. [ [http://www.fao.org/documents/show_cdr.asp?url_file=//docrep/004/x4358e/x4358e00.htm "Special Report FAO/WFP Crop and Food Supply Assessment Mission to Ethiopia"] , section 4.5. (Accessed 21 June 2006)] There was an epidemic of this disease in the area during 1970. [ [http://130.238.24.99/library/resources/dossiers/local_history_of_ethiopia/g/ORTGAM.pdf "Local History in Ethiopia"] (pdf) The Nordic Africa Institute website (accessed 29 January 2008)]

Gambela is believed to have major oil resources. In June , the Ethiopian government signed an agreement with of for the joint exploration and development of oil resources in Gambella region. Petronas then awarded a contract for seismic data acquisition to China’s (ZPEB) October of that year. [ [http://www.zpebint.com/english/news/listcontentgs.asp?xxid=26453 "Seismic Survey Project in Ethiopia Put into Operation"] (ZPEB press release)]

The Water and Mines Resources Development Bureau of Gambela announced that it was initiating a program that would drill 13 new manually-operated wells, 54 new deep water wells, and develop four springs. This would provide access to for 26,000 inhabitants, increasing coverage for the state to 42 percent from the existing 27 percent, at a cost of 6 million Birr. [ [http://www.waltainfo.com/EnNews/2007/Jan/19Jan07/23378.htm " Bureau launches 71 water projects in Gambella State"] ()]

Like other Regions in Ethiopia, Gambela is subdivided into administrative zones (and one special , which is not in a zone). However, these zones have not been given proper names.

Woredas in the Gambela Region