The Chickasaw are Native American people originally from the region that would become the Southeastern United States (Mississippi, Alabama, Tennessee). They are of the Muskogean language family and are federally recognized as the Chickasaw Nation.

Sometime prior to the first European contact, the Chickasaw migrated from western regions and moved east of the Mississippi River, where they settled mostly in present-day northeast Mississippi. That is where they encountered European explorers and traders, having relationships with French, English and Spanish during the colonial years. The Chickasaw were considered by the United States (US) as one of the Five Civilized Tribes, as they adopted numerous practices of European Americans. They came into conflict with settlers encroaching on their territory, and were forced by the US to sell their country in 1832 and move to Indian Territory (Oklahoma) during the era of Indian Removal. Most Chickasaw now live in Oklahoma.

The Chickasaw Nation in Oklahoma is the 13th largest federally recognized tribe in the United States. They are related to the Choctaw and share a common history with them. The Chickasaw are divided in two groups: the Impsaktea and the Intcutwalipa.

The name Chickasaw, as noted by anthropologist John Swanton, belonged to a Chickasaw leader.[2] Chickasaw is the English spelling of Chikashsha (IPA: [tʃikaʃːa]), meaning "rebel" or "comes from Chicsa".

The origin of the Chickasaw is uncertain. The noted 19th-century historian Horatio Cushman thought the Chickasaw, along with the Choctaw, may have had origins in present-day Mexico and migrated north.[3] More recent studies, such as work by the archeologist Patricia Galloway, theorize that the Chickasaw and Choctaw coalesced as distinct peoples in the 17th century from the remains of Plaquemine culture and other groups whose ancestors had lived in the Lower Mississippi Valley for thousands of years.[4] When Europeans first encountered them, the Chickasaw were living in villages in what is now Mississippi and some in present-day South Carolina. The Chickasaw may have been immigrants to the area.[3] Their oral history supports this, indicating they moved along with the Choctaw from west of the Mississippi River into present-day Mississippi in prehistoric times, which may be an extremely ancient account. The Mississippian and earlier moundbuilding cultures extended on the west side of the river to sites in present-day Louisiana and Arkansas, so both accounts may be reconciled. Earlier Native American cultures built monumental mound complexes in northern Louisiana as early as 3500 BCE.

Another version of the Chickasaw creation story is that they arose at Nanih Waiya, a great earthwork mound built about 300 CE by Woodland peoples. It is also sacred to the Choctaw, who have a similar story about it. The mound was built about 1400 years before the coalescence of these peoples as ethnic groups. 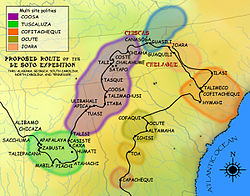 The second leg of the de Soto Expedition, from Apalachee to the Chicaza.

The first European contact with the Chickasaw ancestors was in 1540, when Spanish explorer Hernando De Soto encountered them and stayed in one of their towns, most likely near present-day Tupelo, Mississippi. After various disagreements, the American Indians attacked the De Soto expedition in a nighttime raid, nearly destroying the expedition. The Spanish moved on quickly.[5]

The Chickasaw began to trade with the British after the colony of Carolina was founded in 1670.[citation needed] With British-supplied guns, the Chickasaw raided their neighbors and enemies the Choctaw, capturing some members and selling them into slavery to the British. When the Choctaw acquired guns from the French, power between the tribes became more equalized and the slave raids stopped.

Allied with the British, the Chickasaw were often at war with the French and the Choctaw in the 18th century, such as in the Battle of Ackia on May 26, 1736. Skirmishes continued until France ceded its claims to the region east of the Mississippi River after being defeated by the British in the Seven Years' War.

In 1793-94 Chickasaw fought as allies of the new United States under General Anthony Wayne against the Indians of the old Northwest Territory. The Shawnee and other Northwest Indians were defeated in the Battle of Fallen Timbers, August 20, 1794.[citation needed]

George Washington (first U.S. President) and Henry Knox (first U.S. Secretary of War) proposed the cultural transformation of Native Americans.[6] Washington believed that Native Americans were equals, but that their society was inferior. He formulated a policy to encourage the "civilizing" process, and Thomas Jefferson continued it.[7] The historian Robert Remini wrote, "They presumed that once the Indians adopted the practice of private property, built homes, farmed, educated their children, and embraced Christianity, these Native Americans would win acceptance from white Americans."[8] Washington's six-point plan included impartial justice toward Indians; regulated buying of Indian lands; promotion of commerce; promotion of experiments to civilize or improve Indian society; presidential authority to give presents; and punishing those who violated Indian rights.[9] The government appointed agents, such as Benjamin Hawkins, who became Superintendent of Indian Affairs for all the territory south of the Ohio River. Such agents were to live among the Indians and to teach them, through example and instruction, how to live like whites.[6] In the 19th century, the Chickasaw increasingly adopted European-American practices, as they established schools, adopted yeoman farming practices, converted to Christianity, and built homes in styles like their US neighbors. 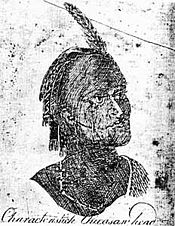 A sketch of a Chickasaw by Bernard Romans, 1775.

The Chickasaw signed the Treaty of Hopewell in 1786. Article 11 of that treaty states: "The hatchet shall be forever buried, and the peace given by the United States of America, and friendship re-established between the said States on the one part, and the Chickasaw nation on the other part, shall be universal, and the contracting parties shall use their utmost endeavors to maintain the peace given as aforesaid, and friendship re-established." Benjamin Hawkins attended this signing. 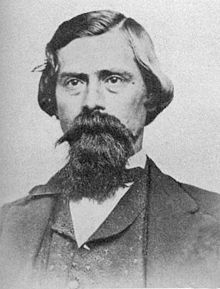 Holmes Colbert, a developer of the Chickasaw constitution in Oklahoma, 1850s.

In the 18th century, a Scots trader by the name of James Logan Colbert settled in Chickasaw country and stayed there for the next 40 years, where he married three Chickasaw women in succession.[10] Chickasaw chiefs and high-status women found such marriages of strategic benefit to the tribe, as it gave them advantages with traders over other groups. Colbert and his wives had numerous children, including seven sons: William, Jonathan, George, Levi, Samuel, Joseph, and Pittman (or James). The Chickasaw had a matrilineal sytem, in which children were considered born to the mother's clan, and they took their status in the tribe from her family. Property and hereditary leadership passed through the maternal line, and the mother's eldest brother was the main male mentor of the children, especially of boys. Because of the status of their mothers, for nearly a century, the Colbert-Chickasaw descendants provided critical leadership during the tribe's greatest challenges. William Colbert once visited U.S. President George Washington. He also served with General Andrew Jackson during the Creek Wars of 1813-14.

Third-generation Colberts, such as Holmes and Winchester, continued the family civic service and political prominence within the nation. They helped create the governmental foundation for the Chickasaw Nation in Indian Country (now known as Oklahoma). Holmes Colbert worked on writing the nation's constitution.

Unlike other tribes who received land grants in exchange for ceding territory, the Chickasaw were to receive financial compensation of $3 million U.S. dollars from the United States for their lands east of the Mississippi River.[11] In 1836 the Chickasaws had reached an agreement that purchased land in Indian Territory from the previously removed Choctaw after a bitter five-year debate. They paid the Choctaws $530,000 for the westernmost part of Choctaw land. The first group of Chickasaw moved in 1837. The US did not pay the Chickasaw the $3 million dollars it owed them for nearly 30 years.

The Chickasaw gathered at Memphis, Tennessee on July 4, 1837 with all of their assets—belongings, livestock, and enslaved African Americans. Three thousand and one Chickasaw crossed the Mississippi River, following routes established by the Choctaw and Creek.[11] During the journey, often called the Trail of Tears by all the Southeast tribes that had to make it, more than 500 Chickasaw died of dysentery and smallpox. Once in Indian Territory, the less numerous Chickasaw merged with the Choctaw nation.

After several decades of mistrust, in the twentieth century, the Chickasaw re-established their independent government and established a Chickasaw Nation. It is now headquartered in Ada, Oklahoma.

The Chickasaw Nation was the first of the Five Civilized Tribes to become allies of the Confederate States of America.[12] As noted they held slaves. In addition, they resented the US government, which had forced them off their lands and failed to protect them against the Plains tribes in the West. In 1861, as tensions rose related to the sectional conflict, the US Army abandoned Fort Washita, leaving the Chickasaw Nation defenseless against the Plains tribes. Confederate officials recruited the American Indian tribes with suggestions of an Indian state if they were victorious. The Chickasaw passed a resolution allying with the Confederacy, which was signed by Governor Cyrus Harris on May 25, 1861.

The Chickasaws were first combined with the Choctaw Nation and their area was called the Chickasaw District. Although originally the western boundary of the Choctaw Nation extended to the 100th meridian, virtually no Chickasaw lived west of the Cross Timbers. The area was subject to continual raiding by the Indians on the Southern Plains. The United States eventually leased the area between the 100th and 98th meridians for the use of the Plains tribes. The area was referred to as the "Leased District".[citation needed] 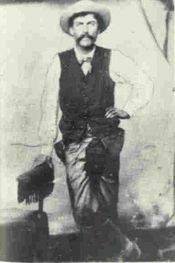 The Chickasaw Nation never gave citizenship to the Chickasaw freedmen. The only way blacks could become citizens at that time was to have Chickasaw parents or to petition for citizenship and go through the same process as any other race to gain citizenship, if they were of known Chickasaw descent. Because the Chickasaw Nation had working relations with the Confederacy and did not adopt their freedmen after the Civil War, they were penalized by the U.S. Government. It took over half of their lands, with no compensation, although the territory had been negotiated as Chickasaw property in previous treaties for their use after Removal.

The suffix -mingo (Chickasaw: minko) is used to identify a chieftain. For example, Tishomingo was the name of a famous Chickasaw chief. Towns he town of Tishomingo, Mississippi and Tishomingo County, Mississippi were named after him, as was the town of Tishomingo, Oklahoma. South Carolina's Black Mingo Creek was named after the colonial Chickasaw chief, who controlled the lands around it as a sort of hunting preserve. Sometimes it is spelled minko, but this most often occurs in older literary references.

In 2010, the tribe opened the Chickasaw Cultural Center in Sulphur, Oklahoma. it includes the Chikasha Inchokka’ Traditional Village, Honor Garden, Sky and Water pavilion, and several in-depth exhibits about the diverse culture of the Chickasaw.[22]