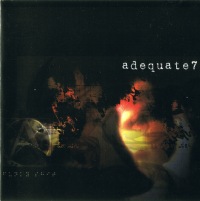 "Adequate 7 EP" is the debut release from the Welsh funk/punk/hardcore band . It contains 5 tracks, and is limited to 1500 copies.