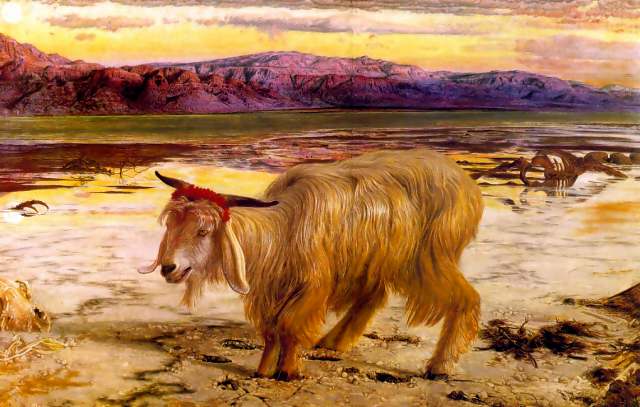 "The Scapegoat" (1856) is a painting by which depicts the "" described in the , which must be ritually expelled from the flocks of the Israelite tribes as part of a sacrificial ritual of cleansing. In line with traditional Christian theology, Hunt believed that the scapegoat was a prototype for the redemptive sacrifice of , and that the goat represented that aspect of the described in as a "suffering servant" of God. Hunt had the picture framed with the quotations "Surely he hath borne our Griefs and carried our Sorrows; Yet we did esteem him stricken, smitten of GOD and afflicted." (Isaiah 53:4) and "And the Goat shall bear upon him all their iniquities unto a Land not inhabited." ( 16:22)

In the exhibition catalogue Hunt wrote that "the scene was painted at Oosdoom, on the margin of the salt-encrusted shallows of the . The mountains beyond are those of ." [Bronkhurst, Judith, "Wiliam Holman Hunt, A Catalogue Raisonné", vol. 1, p.180.]

The painting was the only major work completed by Hunt during his first trip to the Holy Land, to which he had travelled after a crisis of religious faith. Hunt intended to experience the actual locations of the Biblical narratives as a means to confront the relationship between faith and truth. While in Jerusalem Hunt had met , a millenarian prophet who had distinctive theories about the meaning of the scapegoat and the proximity of the . Monk was particularly preoccupied with .

Hunt chose a subject derived from the as part of a project to convert Jews to Christianity. He believed that Judaic views of the scapegoat were consistent with the Christian conception of the Messiah as a suffering figure. He wrote to his friend , "I am sanguine that that [the Scapegoat] may be a means of leading any reflecting Jew to see a reference to the Messiah as he was, and not as they understand, a temporal King." [Fleming, G.H.," John Everett Millais: A Biography", 1998, Constable, p.158]