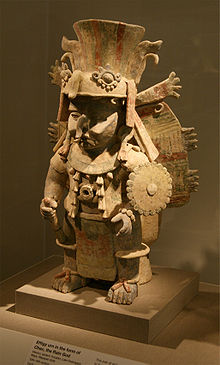 Chaac (also spelled Chac or, in Classic Mayan, Chaahk) is the name of the Maya rain deity. With his lightning axe, Chaac strikes the clouds and produces thunder and rain. Chaac corresponds to Tlaloc among the Aztecs.

Like other Maya gods, Chaac is both one and manifold. Four Chaacs are based in the cardinal directions and wear the directional colors. In 16th-century Yucatan, the directional Chaac of the east was called Chac Xib Chaac 'Red Man Chaac', only the colors being varied for the three other ones.[1]

Contemporary Yucatec Maya farmers distinguish many more aspects of the rain and the clouds and personify them as different, hierarchically-ordered rain deities. The Chorti Maya have preserved important folklore regarding the process of rain-making, which involved rain deities striking rain-carrying snakes with their axes.

The rain deities had their human counterparts. In the traditional Mayan (and Mesoamerican) community, one of the most important functions was that of rain maker, which presupposed an intimate acquaintance with (and thus, initiation by) the rain deities, and a knowledge of their places and movements. According to a Late-Postclassic Yucatec tradition, Chac Xib Chaac (the rain deity of the east) was the title of a king of Chichen Itza,[2] and similar titles were bestowed upon Classic rulers as well (see below).

Images of the Great Water Cycle

Particularly the Huastec Maya (Teenek), have a cyclical concept of water. Virile, young lightning deities dominating the skies during the rainy season are transformed into wasted, terrestrial and subterranean old men (Mamlab 'Grandfather') during the dry season; in the ocean, the old men rejuvenate themselves again. This cyclical concept may well have been shared by the Classic Period Maya.

Among the rituals for the rain deities, the Yucatec Cha-Chaac ceremony for asking for rain was a ceremonial banquet for the rain deities; it included four boys acting as frogs. Asking for rain and crops was also the purpose of 16th-century rituals at the karstic wells, or cenotes, of Yucatan. Young men and women were lowered into these wells and left to drown there, so as to make them enter the realm (and possibly, become the escorts) of the rain deities. Alternatively, they were thrown into the wells later to be drawn up again, and give oracles.

The rain deity is a patron of agriculture. A well-known myth in which the Chaacs (or related Rain and Lightning deities) have an important role to play is about the opening of the mountain in which the maize was hidden. In Tzotzil mythology, the rain deity also figures as the father of nubile women representing maize and vegetables. In some versions of the Q'eqchi' myth of Sun and Moon, the rain deity Choc (or Chocl) 'Cloud' is the brother of Sun; together they defeat their aged adoptive mother and her lover. Later, Chocl commits adultery with his brother's wife and is duly punished; his tears of regret give origin to the rain. Versions of this myth[3] show the rain deity Chac in his war-like fury, pursuing the fleeing Sun and Moon, and attacking them with his lightnings. 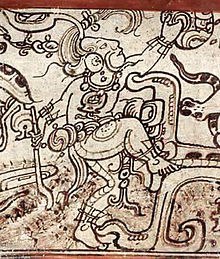 Chaac is usually depicted with a human body showing reptilian or amphibian scales, and with a non-human head evincing fangs and a long, pendulous nose. In the Classic style, a shell serves as his ear ornament. He often carries shield and lightning-axe, the axe being personified by a closely related deity, god K, called Bolon Dzacab in Yucatec. The Classic Chaac sometimes shows features of the Central Mexican (Teotihuacan) precursor of Tlaloc.

A large part of the most important Maya book, the Dresden Codex, is dedicated to the Chaacs, their locations, and activities. It illustrates the intimate relationship existing between the Chaacs, the Bacabs, and the aged goddess, Ixchel. The main source on the 16th-century Yucatec Maya, Bishop de Landa, combines the four Chaacs with the four Bacabs and Pauahtuns into one concept. The Bacabs were aged deities governing the subterranean sphere and its water supplies, corresponding to the Huaxtec Mamlab mentioned above.

In the Classic period, the king often impersonated the rain deity (or an associated rain serpent) while the pictogram of the rain deity can accompany the king's other names. This may have given expression to his role as a supreme rain-maker. Often, however, it is the war-like fury of the rain deity that receives emphasis (as is also the case in the myth mentioned above). The king personifying the rain deity is then shown carrying war implements and making prisoners,[4] while his actions seem to be equated with the violence of a thunderstorm.

About Chaac's role in Classic period mythological narrative, little is known. He is present at the resurrection of the Maya maize god from the carapace of a turtle representing the earth. The so-called 'confrontation scenes' are of a more legendary nature. They show a young nobleman and his retinue wading through the waters and being approached by warriors. One of these warriors is a man personifying the rain deity. He probably represents an ancestral king, and seems to be referred to as Chac Xib [Chac][5] Together with the skeletal Death God (God A), Chaac also appears to preside over an initiate's ritual transformation into a jaguar.