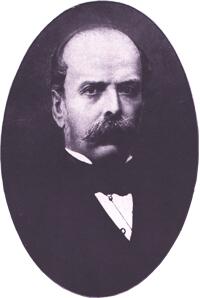 Pacini was born in , to a humble family, but was given a religious education in hopes that he would become a bishop. However, in 1830 he was given a scholarship to the venerable medical school in Pistoia. He learned his trade as a physician, and learned to dissect and examine bodies with a microscope.

In 1831, during a dissection class, Pacini discovered small sensory organs in the which can detect pressure and vibrations. He studied them closely from 1833 on, and first discussed them in 1835 at the "Società medico-fisica" in Florence, but did not publish his research ("Nuovi organi scoperti nel corpo umano") until 1840. Within just a few years, the work was widely known in Europe and the bodies had become known as .

He served as an assistant to in from 1840 to 1843, then began working at the Institute of Human Anatomy. In 1847 Pacini began teaching at the Lyceum in Florence, and then was named chair of General and Topographic Anatomy at the "Istituto di Studi Superiori" at the in 1849, where he remained to the end of his career.

The which swept through Florence in 1845–1846 brought the disease to the center of Pacini's attention. In 1854 he described the disease in a paper called "Microscopical observations and pathological deductions on cholera", but because of the prevailing belief of Italian scientists in the , the work was not noted by others until many years after his death, despite additional publications in 1865, 1866, 1871, 1876, and 1880 which identified the cause of the disease's lethality, and even proposed some effective treatments. John Snow, who disproved the miasma theory, and , widely credited with the discovery of the bacillum thirty years later, were unaware of his previous work.

When Koch, a much more widely respected scientist who had previously identified the bacillus, presented his findings to the Cholera Commission of the Imperial Health Office in Berlin in 1884, the commission congratulated him, but also recognized Pacini's previous discovery of the bacterium. In 1965, the international committee on nomenclature adopted the formal name "Vibrio cholerae Pacini 1854" to honor his work.

During his career Pacini also published several studies on the retina of the human eye, the electric organs in electric fishes, the structure of bone, and the mechanics of respiration.

Pacini did not marry, and spent most of the money remaining after his scientific investigation on the long term care of his two ailing sisters. He died nearly penniless in Florence on , , and was buried in the cemetery of the Misericordia. In 1935 his remains were transferred to the church of Santa Maria delle Grazie, along with the remains and , two other noted anatomists.