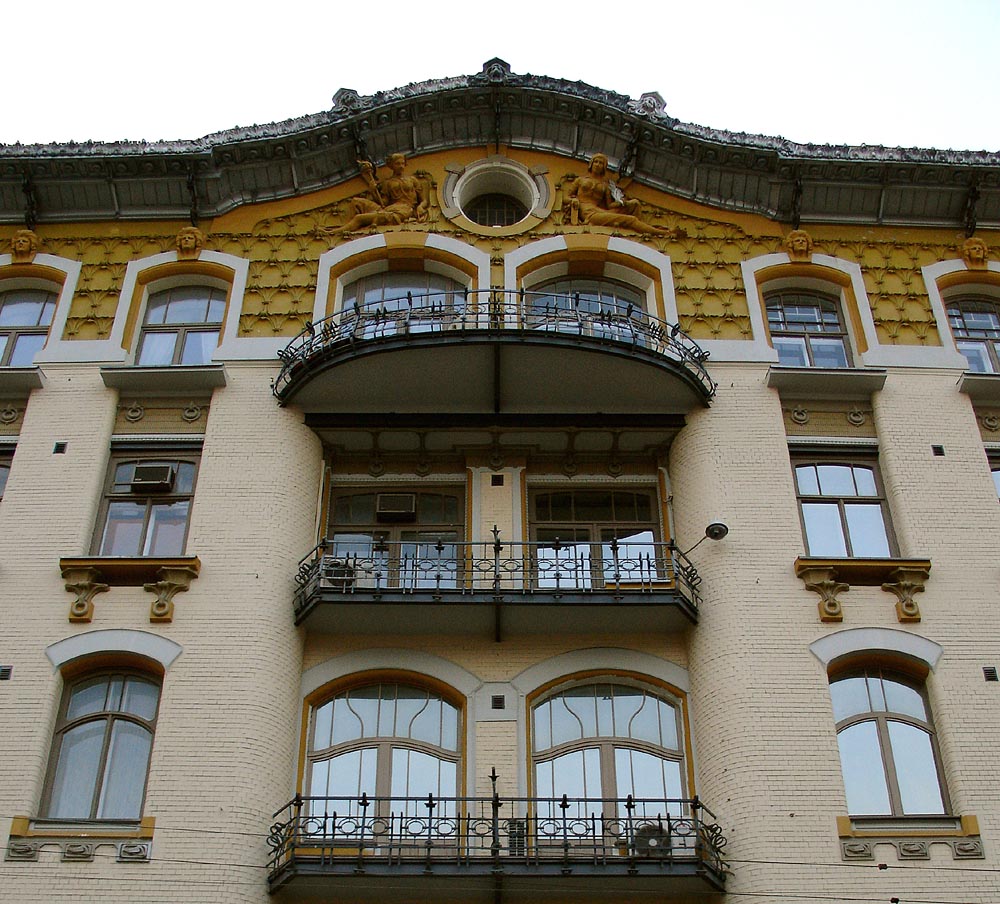 Lev Nikolayevich Kekushev ( _ru. Лев Николаевич Кекушев) was a n architect, notable for his buildings in , built in the 1890s and early 1900s in the original, Franco-Belgian variety of this style. Kekushev's buildings are notable for his skillful use of metal ornaments and his signature with a lion ("Lev") ornament or sculpture.

Kekushev was born in the family of a Russian officer in (Maria Naschokina, p.253; according to other sources). Kekushev graduated high school in Vilno, and the Institute of Civil Engineers in (1883-1889). For one year, he worked as a state-employed construction engineer in Saint Petersburg, but relocated to Moscow in 1890. At first an assistant to architect , he started independent practice in 1893. At the same time, Kekushev became a master in applied art technologies - iron , silver and chemical frosting of glass. Throughout the 1890s, Kekushev and were employed by Moscow-based railway companies and designed dozens of extant railway stations.

Kekushev was the first practicioner of in Moscow, starting with his apartment buildings in Varsonofyevskay Lane and Bolshaya Dmitrovks, completed 1893. His style (unlike the next generation of Art Nouveau architects like and ) is very close to the original Belgian style of . The new wave of architecture was endorsed and financed by prominent business figures like the Khludov and Morozov families and Jacob Reck.

In 1898-1899, Kekushev won the first prize in the open contest for Hotel Metropol; financier discarded the decision of a professional jury and awarded architectural design to . However, the owners retained Kekushev as overall project manager. "None of this (Walcot's earlier) work is on the scale of the Metropole; Kekushev's assistance was probably crucial to the final realization of this complex structure, with its immense dome of glass and iron over an interior court" (Brumfield, chapter 3). Kekushev's talent and recognition peaked in 1900-1903, when Art Nouveau, for a while, became the dominant style in Moscow. His buildings include such diverse luxury residences as the timber-framed Nosov House (Electrozavodskaya Street) and stone and steel Mindovsky House (44 , now Embassy of - a part of a large affluent community developed by Jacob Reck). Kekushev, skilled in interior finishes, practiced approach, designing interiors down to the smallest details. Unlike other architects, who commissioned artwork finishes to independent artists, all Kekushev buildings have distinct Kekushev metal ornaments.

After the , when public opinion "dismissed Art Nouveau as of fashion" (Brumfield, chapter 3) in favor of Neoclassical revival, Kekushev was unwilling or unable to change, and worked on low-profile, unimportant projects. By 1912 he practically disappeared from professional scene.

Maria Naschokina, a historian of Art Nouveau, suggested that Kekushev's withdrawal was actually caused by unspecified (probably, mental) illness; this statement has not been thoroughly proved. Kekushev's last years remain a mystery; even the year of his death is disputed (1916 to 1919).

The architect's son, , was a famous who saw combat in 1924 in Central Asia, later working as aircraft engineer on Arctic flights in the 1920s and 1930s. He was a member of 's air crew that was the first to reach the on in preparation for 's polar expedition. During , he flew 59 missions on a DC-3 to and from besieged Leningrad, evacuating starving residents; later, he served on anti- Arctic patrols. In 1948 Nikolay Kekushev was arrested, and he spent six years in labor camps. He survived and wrote a book of memoirs, "Zveriada"; however, it does not reveal much about his father's last years.