Clapham is a village and civil parish in the Borough of Bedford in Bedfordshire, England. It has a population of 3,643.[1]

Clapham has numerous public houses and several small shops; including a post office, Chinese and Indian takeaways, fish and chips, a florist, a hairdresser and a small bank; also it has two churches. It has its own lower school for children aged 4–9, Ursula Taylor Lower School. In the nearby village of Oakley is Lincroft Middle School for children aged 9–13. It has three pubs, the Horse and Groom, the Fox and Hounds and the Star, as well as these there is also an Italian restaurant, Bellini's. 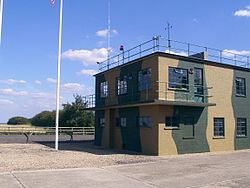 RAF Twinwood Farm, a disused airfield on the western outskirts of the village, is where the famous bandleader Glenn Miller took off on his last fateful flight, having performed for the American soldiers based at the airfield (51 Operational Training Unit ROYAL AIR FORCE was the main unit based at Twinwood Farm) and at Bedford Corn Exchange. The Glenn Miller Museum is now open on site with many events taking place during the summer months.

Clapham Park, a large new country house, was built by James Howard, member of parliament for Bedford, in 1872.

There is also a derelict Italian POW camp, which is now owned by a farmer and has been the victim of graffiti artists.