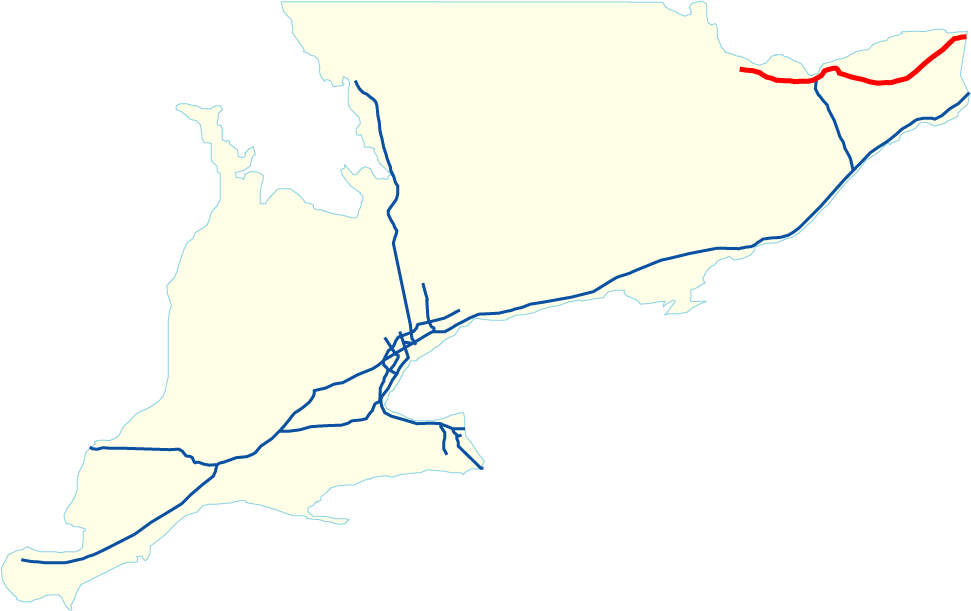 Highway 417 is a 400-series highway in . It is the backbone of the transportation system in the Ottawa region, where it is known as the Queensway (from the Ottawa Road 174 interchange to at least Highway 7). It extends from the border (near Hawkesbury, where it joins Autoroute 40) to Arnprior, where it continues westward as Highway 17. The eastern section from the Quebec border to the east side of Ottawa opened in the 1970s. Sections west of Ottawa have been under construction since the mid-1990s, in three phases, with the latest section to Arnprior opening in 2005. See the Queensway for more detail about Highway 417's Ottawa section.

The first sections of the Queensway that were eventually made part of the 417 alignment were constructed in the early 1960s. The central zone of Queensway was gradually extended both eastward and westward through Ottawa in the late 1960s and 1970s. As the Queensway/417 was extended, a section of Highway 17 through the city "disappeared", although the two sections of Highway 17 were directly linked by Highway 417. This comprises most of the Queensway route. In the eastern part of Ottawa, at an interchange known as "the split", Highway 417 was built on a new alignment that bypassed the existing Highway 17. Highway 17 resumed east of "the split", with its short freeway section constituting the rest of the Queensway route, before 1998 provincial downloading threw it into doubt. Near the Quebec border, Highway 17 again met up with and terminated with Highway 417, shortly before 417 turns into Autoroute 40. After 1998, when Highway 17 became Ottawa Regional Road 174, Highway 417 assumed the designation all the way to its eastern terminus.

For many years, Highway 417 was one of the few isolated 400-series highways without direct freeway access to the "backbone" of the network, Highway 401, until the completion of Highway 416 in 1999.

Highway 417 is often quite congested through Ottawa, but currently there is no expansion planned through the city centre. An Ottawa bypass plan was briefly discussed in 2001-2003, but is now on the political backburner. As of 2005, The Ontario Ministry of Transportation (MTO), is in the preliminary planning stages of an [http://www.mto.gov.on.ca/english/engineering/417ea/ extensive upgrade of the infrastructure of the Queensway] along Highway 417 from Highway 416 eastward to Anderson Road. Phased construction is scheduled to begin in 2007. On June 27, 2007 a limited expansion plan was announced by the MTO to expand a 7 km stretch of 417 from the 416 westward to Eagleson road from 2 lanes per side to 4 (eight lanes total). The expected completion date is July 2009. One lane in each direction will be reserved for HOV (high occupancy vehicles) although details have not been released.

The provincial highway department, MTO, also plans to further extend the 417 westerly through the Ottawa Valley by twinning and realigning the existing Highway 17 to a four-lane freeway past Arnprior, where Highway 417 currently ends. No immediate construction timelines have been announced, but route planning by MTO has been completed to Pembroke. In August 2006, construction began on a connection at Exit 145 with an announced four-lane expansion of Highway 7 to Carleton Place from the west side of Ottawa.

In the western part of Sudbury there is a 20 km freeway section of Highway 17 completed that could be incorporated into a future Highway 417 (likely exit numbers in the low 600s), as well as a 40 km section from Sault Ste. Marie to Desbarats. It is a four-lane expressway with grade level intersections (with exit numbers likely in the low to mid-900s).

The 417 currently has 42 interchanges from the Quebec border to Arnprior, with more planned as the highway is extended westward (shown below). Unlike other highways in Ontario, exits are numbered from east to west.

* Beyond Petawawa no routing has been planned.