Mammy (1930) is a musical drama film with Technicolor sequences, released by Warner Brothers. The film starred Al Jolson and was a follow-up to his previous film, Say It With Songs (1929).

Mammy became Al Jolson's fourth feature, following earlier screen efforts as The Jazz Singer (1927), The Singing Fool (1928), and Say It With Songs (1929). The movie relives Jolson's early years as a minstrel man. With songs by Irving Berlin, who is also credited with the original story titled Mr. Bones. 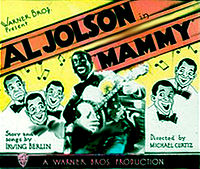 Poster for the film.

The original Technicolor sequence was found in a Dutch print which had Dutch titles inserted in several places. This print was restored by the UCLA Film and Television Archive. Unfortunately, sections of those sequences were lost when Dutch titles were inserted, and some of the cuts from color to sepia tinted black and white are not smooth. Additionally, two songs are missing from all existing prints that were in the original release: "The Call of the South" and "Knights of the Road". They were written by Irving Berlin and sung by Al Jolson.