Manali (Hindi: मनाली) (alt. 1,950 m or 6,398 ft), in the Beas River valley, is an important hill station in the mountains of Himachal Pradesh, India, near the northern end of the Kullu Valley. It is located about 250 kilometres (155 mi) north of state capital, Shimla.

Manali is administratively a part of the Kullu district, with population of approx. 30,000. The small town was the beginning of an ancient trade route to Ladakh and, from there, over the Karakoram Pass on to Yarkand and Khotan in the Tarim Basin.

Manali and the surrounding area is of great significance to Indian culture and heritage as it is said to be the home of the Saptarshi, or Seven Sages[citation needed].

Monthly precipitation varies between 31 mm (1.2 in) in November to 217 mm (8.5 in) in July. In average, some 45 mm (1.8 in) of precipitation is received during winter and spring months, increasing to some 115 mm (4.5 in) in summer as the monsoon approaches. The average total annual precipitation is 1,363 mm (53.7 in). Snowfall in the region, which usually took place in the month of December, has been delayed over the last fifteen years to January or early February.

Manali is named after the Brahmin lawgiver Manu. The word Manali is regarded as the changed name of "Manu-Alaya" which literally means "the abode of Manu".[3] Legend has it that sage Manu stepped off his ark in Manali to recreate human life after a great flood had deluged the world. Manali is also often referred to as the "Valley of the Gods".[4] The Old Manali village has an ancient temple dedicated to sage Manu.[5][6]

In ancient times, the valley was sparsely populated by nomadic hunters known as 'rakshas'. The next arrivals were the shepherds who arrived from the Kangra Valley and settled to take up agriculture. Some of the earliest inhabitants of the region are the 'naur' or 'nar', which is a caste unique to the Kullu valley. Only a few naur families are known to exist now. A naur family in the village Soyal near Haripur on the west bank of Manali was famous for the vast land they owned and their practice of having 'rakshas' as their labourers.[citation needed]

The British introduced apple trees and trout, which were not native to Manali flora and fauna. It is said that when apple trees were first planted the fruits were so plentiful that often branches, unable to bear the weight, would collapse.[citation needed] To this day, apple—along with plum and pear—remains the best source of income for the majority of its inhabitants.

Tourism in Manali received a boost after the rise of militancy in Kashmir in the late 1980s. This once quiet village was transformed into a bustling town with many hotels and restaurants.

Manali is well connected by road to Delhi through NH-21 and NH 1, which goes on to Leh and is claimed to be world's highest motorable road. Leading up to Manali from New Delhi are the towns of Panipat and Ambala in Haryana, Chandigarh(Union Territory), Ropar in Punjab, and Bilaspur, Sundernagar, and Mandi in Himachal.

The nearest airport is at Bhuntar, which is about 50 km (31 mi) from Manali. Currently, Kingfisher Red operates daily nonstop services from Delhi, Air India provides twice a week nonstop services and MDLR Airlines provides services to Delhi six days in a week. 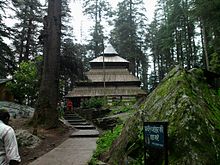 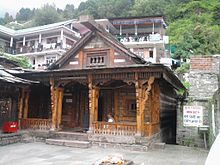 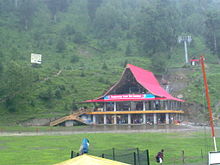 HADIMBA TEMPLE (1 km) : Built in 1533 A.D. with a superbly crafted four tiered pagoda roof, it is famous for its exquisitely carved doorway.

MANU TEMPLE (2 km) : This is dedicated to the sage Manu situated at old Manali.

VASHISTH (3 km) : Well known for its hot springs. There are old temples dedicated to the sage Vashisth and to Lord Rama.

MONASTERIES : There are three recently built Tibetan monasteries at Manali.

JAGATSUKH (6 km) : The one time capital of Kullu. Here are old temples dedicated to Lord Shiva and to Sandhya Gayatri. The Arjun caves are just ahead.

SOLANG VALLEY(14 km) : In a picturesque setting this has good ski slopes and picnic spots.

TOWARDS THE ROHTANG PASS : On the road to Keylong is the Nehru Kund (6km) which is a clear water spring scenic spot named after the Late Pt. Jawaharlal Nehru. Kothi (12km) is a picturesque village and has a thrilling view of the deep gorge through which the Beas swiftly races. The beautiful Rahalla falls (16km) are at at altitude of 2500m. A crucial link on the old trade route and still the gateway to trans Himalayan Lahaul, the Rohtang Pass is at height of 3978 m.

CLUB HOUSE : The Club House with its comprehensive facilities that include a roller skating rink, an auditorium, billiards rooms, a library, a bar and restaurant makes wonderful outing for the day.Bungee jumping is also provided. 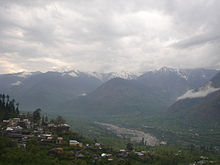 Beas river flowing from the mountains

Nagar : This is also very beautiful place in manali.

ROHTANG : This is beautiful Snow covered area near by manali, Just 52 Km. from manali.