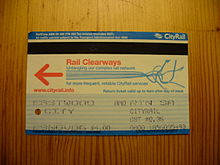 The CityRail Clearways Project is a $1.8 billion program of public works on Sydney's CityRail suburban railway network to "untangle" the excessively intertwined and complicated rail network. The Government of New South Wales has suffered heavy criticism for its perceived mishandling of the Sydney rail network - which had very poor on time performance following the Waterfall train disaster in January 2003. The safety regime introduced after this crash required drivers to stick to the speed limit, which often caused delays due to the expectations of the timetable for higher speeds. A new slower timetable was introduced in September 2005, which significantly improved on time running.[1] The clearways plan is intended to be the next step in improving on time performance.

Currently, delays on one part of the system can affect trains in a completely different section of the network, due to the heavily interwoven system in which infrastructure, carriages and services are shared between lines. The Clearways project aims to divide the network's fourteen metropolitan rail lines into five independent "clearways". This is intended to isolate incidents to one part of the network so other clearways will still run as scheduled, increasing on time performance. The clearways will feed the existing lines through the Central Business District.[2] As the Carlingford Line does not run through the CBD, it is not included in any of the clearway routes. However, a Carlingford Line upgrade was included in the clearways project before being cancelled in the November 2008 Mini-Budget.[3] The Cumberland Line is spread across Clearways 4 and 5. Intercity lines are not included in the project but may incur fewer delays as trains pass through the suburban area and benefit from the improved reliability of suburban services.[4]

All projects were delivered by the Transport Construction Authority until November 2011, when TCA was subsumed by Transport for New South Wales.

The five clearways routes are designed to improve capacity and help isolate operating problems. These routes are:

This route will not change from the current Eastern Suburbs and Illawarra line. The projects undertaken on this route have increased capacity.

The Campbelltown Express Clearway will separate the section of the East Hills line west of Revesby from the inner section that line by quaduplicating between Kingsgrove and Revesby. This will allow more frequent express services to the City, relieve pressure on other parts of the network and improve the distribution of passengers. Trains will go from Macarthur through to Revesby then express through to the City Circle via Sydenham and back again.

The Airport and South Clearway will feed the Inner West, East Hills and Airport, and South lines. Faster services from the South Line will begin at Glenfield and make their way through Liverpool, Cabramatta, Granville, Lidcombe and Strathfield stations to the City Circle. All-stations Inner West Line services to the City will start at Homebush.[5] After passing through the City Circle, trains will head south-west via the Airport to Revesby (running parallel with the Campbelltown Express line from Wolli Creek to Revesby).

North West Clearway will provide an independent corridor for the North Shore, Northern and Western lines. It will improve reliability and capacity. Trains from the west will start from the Richmond, Penrith or Epping branches, meet up at Strathfield and travel through the city to Chatswood. Here trains will split, either continuing up the North Shore line to Berowra, or via the Epping to Chatswood line to Hornsby.

Other projects not officially part of the Rail Clearways program that will also improve the suburban passenger network include: