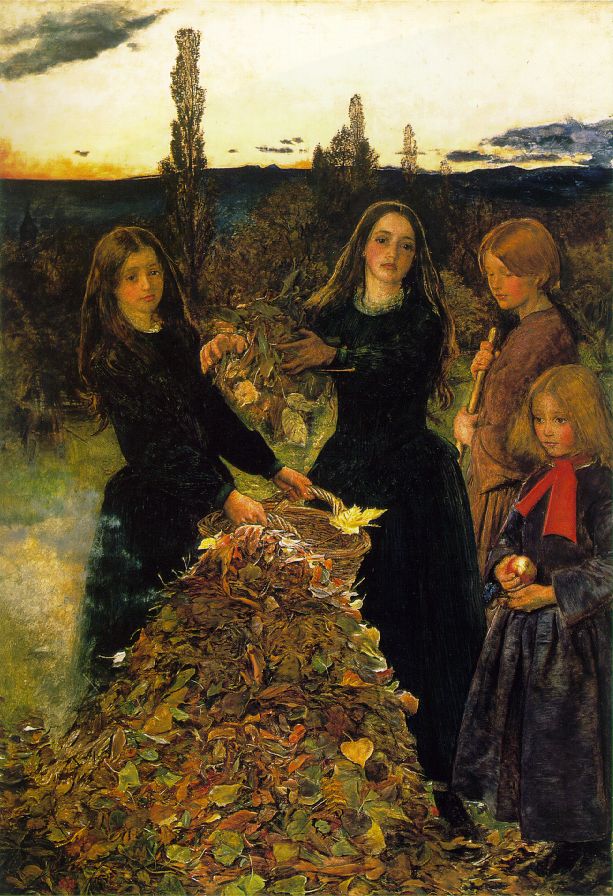 "Autumn Leaves" (1856) is a painting by exhibited at the in 1856. It was described by the critic as "the first instance of a perfectly painted twilight." Millais's wife Effie wrote that he had intended to create a picture that was "full of beauty and without a subject".

The picture depicts four girls in the twilight collecting and raking together fallen leaves in a garden. They are making a bonfire, but the fire itself is invisible, only smoke emerging from between the leaves. The two girls on the left are portrayed in middle class clothing of the era; the two on the right are in rougher, working class clothing.

The painting has typically been interpreted as a representation of the transience of youth and beauty, a common theme in Millais's art. argues that Millais was influenced by the poetry of , at whose house he had once helped to rake together autumn leaves. Warner suggests that lines from Tennyson's song "" in "The Princess" (1847) may have influenced him:

Tears, idle tears, I know not what they mean.
Tears from the depth of some divine despair
Rise in the heart, and gather to the eyes,
In looking on the happy Autumn-fields,
And thinking on the days that are no more. [ [http://www.usp.nus.edu.sg/victorian/painting/millais/paintings/ringel3.html Victorian Web: Nostalgic Intensity in Millais's Autumn Leaves] ]

The apple held by the youngest girl at the right may allude to the loss of childhood innocence implied by reference to and the expulsion from the . [ [http://www.usp.nus.edu.sg/victorian/painting/millais/paintings/simmons3.html Mortality, Purity, and Religious Contemplation in Autumn Leaves] ]

After a positive review from F.G. Stephens, Millais wrote to him that he had "intended the picture to awaken by its solemnity the deepest religious reflection. I chose the subject of burning leaves as most calculated to produce this feeling." [National Gallery of Art, Washington, "The Victorians: British Painting 1837-1901", p.73, 1997]