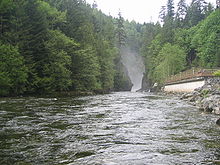 The District of North Vancouver is separated from Vancouver by Burrard Inlet. It can be accessed by the Lions' Gate Bridge, the Ironworkers Memorial Second Narrows Crossing, and the SeaBus passenger ferry.

The District is bounded by the Capilano River to the west, Indian Arm to the east, Burrard Inlet to the south, and the Coast Mountains to the north. It sprawls in an east-west direction across the mountain slopes, and is characterized by rugged terrain and steep and winding roadways. While there is no true urban core within the District, there are a number of separate commercial neighbourhood centres. These include (from west to east): Edgemont Village, Upper Lonsdale, Lynn Valley, Main Street, Parkgate, and Deep Cove. 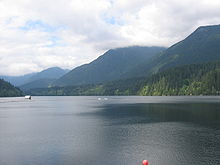 The District has a lot in common with West Vancouver and the City of North Vancouver. Together these three municipalities are commonly referred to as the North Shore. Most of the residents of the District live in single family dwellings. Except for a few more historical areas, much of the development of the District has occurred since the 1950s. The City of North Vancouver has considerably higher commercial and residential density. However, the differences between the two "North Vans" are most apparent to their respective residents. For the most part, other Lower Mainland residents rarely distinguish between the District and the City, referring to both collectively as "North Vancouver".

For thousands of years, the Indigenous Sḵwxwú7mesh and their kin Tsleil-Waututh, of the Coast Salish, resided in the land known as North Vancouver. Slightly over 200 years ago, the people of the Sḵwxwú7mesh and Tsleil-Waututh living on the North Shore had their first glimpse of Europeans. First the Spanish arrived, giving their name to Vancouver’s Spanish Banks and, in 1792, Captain George Vancouver explored the local shores. But it was not until 1862 that the first attempt was made to harvest the North Shore’s rich stands of timber, leading to fuller settlement of the area that would later become North Vancouver.

The first industry on the North Shore was Pioneer Mills, founded in 1862 to log the huge trees of the coastal rainforest. After twice changing hands, the operation was bought by Sewell ("Sue") Prescott Moody in 1865. Near where the Saskatchewan Wheat Pool grain elevators now stand, the town of Moodyville grew up and stood as the main centre of activity on the North Shore until the mill closed in 1901. The first school was established in Moodyville. The second, Central School, opened in 1902 in a building that still stands as part of what is now Presentation House at 3rd Street and Chesterfield Avenue, the current home of the North Vancouver Museum and Archives.

In 1891, the first municipality on the North Shore was formed as the District of North Vancouver. It stretched across the North Shore from Horseshoe Bay to Deep Cove but omitted Moodyville. In the early years of this century, a real estate boom took place, with speculators – including the British poet Rudyard Kipling – eager to turn a quick dollar. A new community began to take shape. In 1902, the Hotel North Vancouver was built; in 1905, the first bank, a branch of the Bank of North America, opened. A newspaper, the Express, commenced publication in 1905 and in 1906 the British Columbia Electric Railway began streetcar service.

Industry, particularly shipbuilding, became central, with the magnificent stands of trees a rich resource for a society in which ships, houses and most other manmade things were constructed mainly of wood. The Wallace Shipyards moved in 1906 to the area just east of Lonsdale Avenue, drawn by the arrival of electricity. Over the years, this company, later known as Burrard Dry Dock and then Versatile Pacific Shipyards, became a major force in the local economy. Many of the shipyard's buildings still stand although the company has now ceased operations.

Economic prosperity and rapid growth in the Lower Lonsdale area of North Vancouver led to the establishment in 1907 of the separate City of North Vancouver, with a population of approximately 1,500. West Vancouver separated from the District in 1912. Apart from the addition of Moodyville in 1915, the boundaries of the City have not changed, even though far more people now call the District home.

Communications with Vancouver have always been an important factor in the development of the North Shore. The first ferry service was supplied by "Navvy Jack’s" rowboat in 1866. In 1867, the Sea Foam established regular ferry service that continued until 1958. The SeaBus re-established water transportation in 1977. Rail service was slower in developing. While the Pacific Great Eastern Railway inaugurated a 12.7-mile run from North Vancouver to Whytecliff in 1914, it was not until the completion of the first Second Narrows Bridge in 1925 that rail and road links with the Lower Mainland supplemented the local ferry service.

Early plans for North Vancouver were ambitious. The City as a communications hub and industrial centre was surrounded by the more rural District, both municipalities in a magnificent geographical setting that appeared to open endless possibilities. But early grandiose plans met with a number of setbacks. The real estate boom was overtaken by a worldwide depression in 1913 and then World War I delayed many projects. The depression that began in 1929, coupled with disruptions to communications over the Second Narrows caused by ships colliding with the bridge, led to economic difficulties and severe tax shortfalls. Both the City and the District were placed in receivership in 1933. But the opening of the second road crossing, the Lions' Gate Bridge in 1938 was a significant factor in making the North Shore more accessible. And the war years led to an economic revival of North Vancouver, especially because of the many ships built in the Burrard Drydock at the foot of Lonsdale for the Canadian war effort.

In the postwar years, the City and the District of North Vancouver boomed, with most of the growth taking place in the District because of its greater land resources.

While industry was the engine that propelled North Vancouver for much of the twentieth century, this has now largely been replaced by enterprises more in tune with present economic realities. Many North Shore companies are in the business of creating and marketing high technology.

The television and film industry has made the area the centre of Hollywood North. Filming of the popular series The X-Files took place in North Vancouver for five seasons, with many of its "wilderness" sequences shot in the Lower Seymour Conservation Reserve (LSCR). 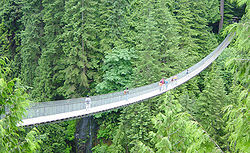