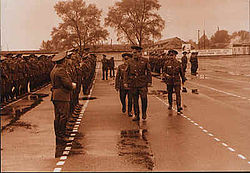 The Northern Group of Forces was the military formation of the Soviet Army stationed in Poland from the end of Second World War in 1945 until 1993 when they were withdrawn in the aftermath of the fall of Soviet Union. Although officially considered Polish allies under the Warsaw Pact treaty, they were seen by most Poles as a Soviet occupation force.[1]

The Soviet forces entered Poland as they were advancing towards Germany in the course of the Red Army Byelorussian Strategic Offensive Operation (Summer 1944). Following the Vistula-Oder offensives (early 1945), the entire Polish territory was cleared from Nazi occupation by Soviet forces. While formal Polish sovereignty was almost immediately restored, the territory of Poland fell under de facto Soviet control as the Soviet military and security forces acted to ensure that Poland would be ruled by the Soviet-installed communist puppet government of Poland.

As the war ended, the structure of the Soviet military was reorganized from a war-time to the peace-time establishment. Directive No. 11097 of 10 June 1945 created several new formations, known as Groups of Forces, equivalent to military districts, but used for command and administration of Soviet forces outside the Soviet Union itself. One of those new formations, at that time 300,000-400,000 strong, was to be stationed in Poland. It was mostly based on the 2nd Belorussian Front of General Konstantin Rokossovsky (formerly stationed around Mecklenburg and Brandenburg).[2][3][4] With the exception of Szczecin (Stettin), which fell under the operational territory of the Western Group of Forces, the Northern Group of Forces was located entirely within the territory of Poland.

The Polish communist government, which largely owed its existence to the Soviets (see Polish Committee of National Liberation, Polish people's referendum, 1946, Polish legislative election, 1947),[1] signed several agreements with the Soviet Union regulating the status and purpose of the Soviet troops.

In the early years, the Soviet forces aided Polish Communists in establishing their government and combating anti-communist and nationalist resistance, such as the Polish cursed soldiers or the Ukrainian Insurgent Army (see Operation Vistula).[1][4] Finally, in the first post-war years, the major task of the Northern Group was to organize and transport war reparations from the former eastern territories of Germany attached to Poland after World War II (the so-called Recovered Territories) to the Soviet Union;[1][5][6][7] those actions, often involving complete stripping down of industrial facilities, sometimes also took place in the traditional Polish territories. This caused tensions between the Soviets and the Polish government, which intended to use the resources of those territories to rebuild Poland.[1][5]

By 1949 the Soviet Union had concluded twenty-year bilateral treaties of friendship, cooperation, and mutual assistance with Poland and several other countries, which usually granted the Soviet Union rights to a continued military presence on their territory.[8] The Polish government, however, had no operational control over the Soviet forces.[4] On December 17, 1956, as one of the agreements of the Polish October period, the Polish and Soviet governments signed the dedicated treaty that would finally fully regulate the Soviet military presence in Poland, the "Agreement on Legal Status of Soviet Troops Temporarily Stationed in Poland".[4][9][10][2][11][1] According to the 1956 treaty (which was further developed by later, more specific amendments), the Soviet military in Poland was limited to 66,000 troops, although the Soviets never fully disclosed the actual number of personnel of the Northern Group to the Polish government, and the Polish government had no right to inspect the Soviet bases.[1][4] The treaty also limited the number of Soviet bases in Poland to 39, while the actual number of bases reached 79.[11][2] The Soviets also installed nuclear weapons in Poland, without informing the Polish government of that fact.[4] The treaty's name declared the Soviet military presence to be temporary, while in fact the treaty did not contain any limitations to the duration of their stay, nor any provisions on their withdrawal.[12][2][11] Until the 1956 agreement, the Soviet troops stationed in Poland were seen by some Poles as occupying Polish territory;[1] even afterwards they were de facto exempt from any Polish oversight[2][5][11] and their role of an 'allied force' stationed in the territory was viewed by many as a mere propaganda claim.[5][1] The issue of Polish-Soviet military cooperation was further regulated the next year, and in the 1965 Polish-Soviet friendship treaty that reflected the Soviet domination of Polish military policy.[13]

The Northern Group of Forces had several objectives. With the beginning of the Cold War, it was to act, together with other Groups of Forces, as a counterpart to the Western Allies (particularly the United States) forces in Europe. Later, in that regard it represented part of the Warsaw Pact forces, countering the NATO troops. Its second objective was much less stressed in public Soviet sources, but nonetheless crucial: it was to ensure the loyalty of the Polish communist government, and its Polish People's Army; a policy consistent with that of the Brezhnev Doctrine, and enforced during events such as the Hungarian Revolution of 1956 or the Prague Spring of 1968.[8][5][13][1][4] Soviet forces were mobilized and actually advanced on Warsaw during Polish October in 1956, and there were threats that they could be similarly used before the martial law in Poland was introduced to stem the progress of the Solidarity movement in 1980.[4] All of the objectives of the Northern Group were shared with the Group of Soviet Occupation Forces in Germany in the German Democratic Republic and to a lesser extent with the two Groups with a shorter history: the Central Group of Forces in Czechoslovakia (from 1968 on) and the Southern Group of Forces in Hungary and (only until 1958) Romania.

The presence of Soviet forces on Polish territory caused several problems, in addition to the war reparations issue. Although not supported by the Soviet High Command, excesses by individual soldiers of the Red Army led to mounting tensions between Soviet forces and the Polish population.[14][15] Contemporary archives contained many reports of mugging, burglary, rape and murder attributed to Soviet soldiers in the immediate aftermath of the Second World War;[16] even Polish Communists were uneasy, as in 1945 the future Chairman of the Polish Council of State, Aleksander Zawadzki, worried that "raping and looting of the Soviet army would provoke a civil war".[17] In the early years, the Red Army appropriated any resources it needed from the Polish government with no thought of compensation, or treating Poles as their allies. For example, when the Northern Group commander, Konstantin Rokossovsky, decided that it should be headquartered in Legnica, he ordered all Poles, including communist officials who were organizing the city and provincial government, to vacate one third of the city within 24 hours, later requisitioning any of their private belongings (like furniture) left behind. This incident was perceived by contemporaries as a particularly brutal action, and rumors circulated exaggerating its severity.[18] Later, Polish settlements in which Soviet garrisons were placed were inconvenienced in other ways, for example by being removed from all official maps[11] or by the low flying Soviet jets, training at night.[4] Approximately 600 Polish citizens died over the years 1945-1993 in crimes or accidents for which the Soviet soldiers were responsible.[4] The Soviet army, which was subject to many financial privileges (reduced taxation, import tariffs, etc.)[4], often refused to pay for municipal resources it consumed, particularly water, gas or electricity.[1][5] On the other hand, Soviet units did also aid the locals with infrastructure projects, harvests, or during environmental disasters.[4]

After the fall of communism in Poland in 1989, and with the signs of the fall of the Soviet Union, the new Polish government wanted the Soviet troops to leave Poland.[4] By that time the Northern Group had already shrunk to 58,000 troops[13], but its military installations were still spread over about 700 square kilometres of Polish territory.[11] After a new treaty in late 1991 and May 1992, and Poland's withdrawal from the Warsaw Pact, the Soviet agreed to withdraw military units by 1992 and support units by 1993.[4] Soviet troops begun leaving Poland, with the first group exiting in 1991. All troops left Poland by the end of 1993, the last leaving on 18 September.[2] Symbolically, Polish President Lech Wałęsa saw them off on 17 September, the anniversary of the Soviet invasion of Poland in 1939.[2]

The Group was headquartered in Legnica, Lower Silesia, where Soviet military took over 1/3 of the city as their extraterritorial enclave (although for six years the operational headquarters was in Świdnica).[2] Other major Soviet military bases were located in Bagicz, Białogard, Brzeg, Borne Sulinowo (one of the two largest), Burzykowo, Chojna, Dębice[disambiguation needed

] (may refer to the same base as Strachów/Pstrąże), Strachów[disambiguation needed

In the late 1940s the NGF's forces included:

Altogether the Northern Group of Forces had three ground and one air Armies, 4 tank corps (from July 1945 reorganized into tank divisions), 30 rifle divisions, 12 air divisions, 1 cavalry corps and 10 artillery divisions. The formation had a strength of around 300,000-400,000 soldiers stationed in Poland.

This large number of formations was quickly reduced as the post war demobilisations took place. By 1955 the force had been reduced to the 18th, 26th, and 27th Rifle Divisions, the 20th Tank Division, and the 26th Mechanised Division - probably numbering no more than 100,000 troops.

Much later, after many reorganisations and reductions, the 6th Motor Rifle Division and 20th Tank Division were the principal Soviet formations stationed in the Group in the 1980s and early 1990s.

The Northern Group had its own newspaper, the Znamia Pobiedy (Flag of Victory).

The Northern Group had nuclear weapons deployed in at least three bases[2][4] in Poland with some 178 nuclear assets, growing to 250 in the late 1980s.

Commanders of Northern Group of Forces

Representative of Polish Council of Ministers

Delegates of Economical Committee of Council of Ministers

The Red Army was stationed in Poland for 48 years; it is estimated that its stay cost the Polish state 62.6 billion złoty (in 1993 prices, approx. 3.5 billion US dollars, not counting items removed from Polish territory after World War II); however, the Polish government decided to waive any claims to ensure a quicker evacuation of Soviet troops.[20][5][4] The Soviets also claimed that any costs Poland incurred were balanced by the various aid (ex. infrastructure construction) provided over the years by the Soviet troops, as well as by the liberation from the Nazi occupation and later security.[4]

In 1994 Polish government passed a legislation covering the use of the territories formerly used by the Soviet forces.[19] Most of those territories have been put on sale by the Polish government.[19] Some of the Soviet administered areas were subject to ecological contamination and pollution (by oil products, heavy metals, unexploded ordnance).[19][21][4] They were also damaged by years of disrepair and poor maintenance.[4]