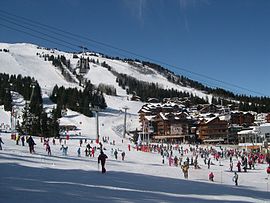 Courchevel 1850, the highest and most famous part of the resort. 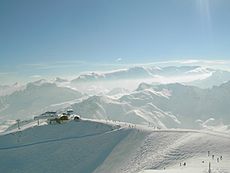 The original resort was planned during the Second World War with a study in 1942 by the Vichy regime and in a doctorate by the town planner Laurent Chappis. Chappis was a natural choice to direct the development of the resort in the immediate post war years. Courchevel 1850 was significant as it was the first resort in France to be constructed from scratch rather than based around an existing village.

Within the Tarentaise Valley you find the biggest concentration of world-class ski resorts in the world. Most well known neighbour systems are Paradiski (Les Arcs, La Plagne) and Espace Killy (Val d'Isère and Tignes). A weekly lift ticket in Courchevel/Les Trois Vallées gives you a choice to ski one day in each of the other two systems mentioned. There were once plans to interlink all systems and resorts to create the - by far - largest ski area in the world. However that vision was ended with the creation of the Vanoise National Park.

The Courchevel valley also includes the town of La Tania, built as competitors accommodation for the 1992 Winter Olympics in Albertville. Le Praz hosted the Olympic ski jump in that year. Nordic combined competitions for those games took place in Courchevel as well.[2] There was a ski Jump in Courchevel 1850 on the snowfront however it was removed recently due to safety precautions.

Courchevel is the most eastern resort of the Three Valleys, the biggest connected ski area in the world. It is renowned for its excellent lift system which is virtually queue free, even at the busiest of times. The UK newspaper The Daily Telegraph named Courchevel in 2008 the "best ski resort in Europe, if you can afford it".[3]

Although Courchevel consists of 4 satellite villages (Courchevel Le Praz, Courchevel 1550, Courchevel 1650 and Courchevel 1850) it is most famous for its highest resort, the exclusive village of Courchevel 1850. Named the St. Tropez of winter sports it attracts a select clientele of VIP's and royal families including Prince William & Katle Middleton,[4] the Beckham's,[5] Christina Aquilera,[6] Geri Halliwel,[7]Lionel Richie,[8] the Saudi royal family,[9] Peter Andre,[10] Robbie Williams, Roman Abramovich, George Clooney, Georgio Armani, the King of Maroc and many others.

Courchevel 1850 has 11 hotels with a 5 star ranking. In 2011 France introduced a very prestigious 6th star ranking for hotels, named "palaces". The palace 6th star ranking is only awarded to the most prestigious, exclusive and luxurious hotels in France. No more than 8 hotels in France have been crowned with this rating. Two of those 8 hotels are in Courchevel 1850's tree lined Jardin Alpin area.[11] No other ski resorts in France have hotels with the palace ranking.

Although the huge majority of Courchevel's visitors are of British nationality (source Courchevel Tourist Agency) the resort is also know for the wealthy Russian elite who flock to the resort during Russian Orthodox Christmas and Russian New Year. These are celebrated 2 weeks later than in Western Europe, on the 7th and 13th of January. Because of this Courchevel's name has become synonymous with "winter playground of the rich and famous" in Russia.[13] The first two weeks of January are high season weeks in Courchevel as a result here of.

Courchevel is known to be an expensive resort. One of the reasons for this is are the high prices of residential and commercial property. Courchevel 1850 is the 6th most expensive place in the world [14] with average square meter prices of 27.000 euros per square meter of property. It leaves cities like Hong Kong, Cannes and Tokyo behind.

Courchevel has one of the largest bases for ski instructors and other seasonals due to the size of the three valleys area. Courchevel's couloirs are renowned as some of the most difficult black runs in the world.

Courchevel's sister city is Park City, Utah, USA, and as such Courchevel has a red-graded ski piste named "Park City".

Courchevel's airport (45°23′51″N 6°38′06″E﻿ / ﻿45.397395°N 6.634884°E﻿ / 45.397395; 6.634884) also has a certain degree of infamy in the aviation industry as home to one of the shortest runways in the world, with a length of 525 metres (1,722 ft) and a gradient of 18.5% in order to help slow landing aircraft. The airport has a dangerous approach through deep valleys which can only be performed by specially certified pilots. On landing there is no go-around procedure, as most of the world's airports have - there is merely a very steep hill which has seen a few accidents since the airport first opened. Larger propeller aircraft such as the Twin Otter and Dash 7 (carrying up to 50 people) have been regular users of the airport over the years, but have since been phased out of use and smaller Cessnas and helicopters are often seen sitting on the tarmac nowadays.

The pre-credit sequence of the James Bond film Tomorrow Never Dies was filmed at Courchevel.

The History Channel program Most Extreme Airports, ranks it as the 7th most dangerous airport in the world.[15]