Costa Valle Imagna is a comune counting 620 inhabitants in the province of Bergamo, in Lombardy, Italy. It is bounded by other communes of Sant'Omobono Imagna.

Costa lies on a high slope above the Valle Imagna. The village has panoramic views of the Bergamo Alps, including Monte Resegone to the north. From the former ski resort of Forcella Alta and the Pertüs pass (1186m or 1193m), you can see the whole of the Brianza range, and even Milan on the clearest days. For communication reasons the Town has had closer links to San Martino, Almenno San Salvatore and La Piana than the rest of the Valle Imagna.

Originally the area seems to have been used for summer grazing, Costa seems to have been populated year-round only since 1300. The town faces northeast and gets very cold in winter; as a result Costa was known in local slang as "Valle Imagna's warehouse of snow" (la nevera della Valle imagna).

When the Republic of Venice annexed the province of Bergamo in 1428, the town found itself on the borders between Venice and the Duchy of Milan. This is reflected in the slang of the town, which refers to "foreigners" as bir, the equivalent of sbirri, a medieval police force. It has been suggested that this dates back to customs officials sent from Venice to patrol the borders of the republic.

In the Counter-reformation, a bishop sent a dispatch deploring the state of the village's church that was a result of the poverty of the area. A plague pit is evidence of the 1630 epidemic described by Alessandro Manzoni.

Since the earliest years of the twentieth century, Costa Valle Imagna has been renowned as a summer resort. 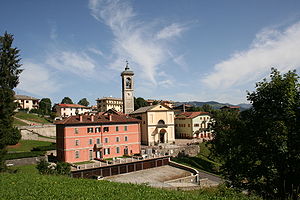 The patron saint is San Rocco, who is celebrated on 16 August with a procession, fireworks, and dances in the public square.