Sir Sandford Fleming Park, known locally as The Dingle Park (Dingle is an Irish village), is a 95-acre (38 ha) urban park located in the Halifax Regional Municipality in the subdivision of Jollimore, Canada.

Designed by Sidney Perry Dumaresq (architect), The Memorial Tower (Dingle Tower) (1910-12) in Sir Sandford Fleming Park [1] stands out as a rare form of architectural expression in this period of rising Canadian nationalism and fervent loyalty to the British Empire. The Memorial Tower is architecturally important because it combines Italianate influences with local construction methods and materials.[2] The tower commemorates Nova Scotia achieving representative government on 2 October 1758, the first colony in the British Empire to do so.

The Memorial Tower was completed in 1912, a number of years after the building of the commemorative Cabot Tower (Newfoundland) (1900) and the Cabot Tower, Bristol (1898).[3] 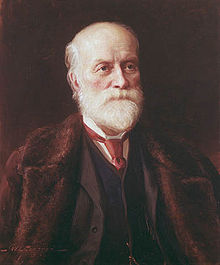 Sir Sandford Fleming - famous for introducing standard time to North America - established a summer retreat on the property fronting the Northwest Arm, part of Halifax Harbour, during the 1880s after finishing construction of the Intercolonial Railway. He called it the "Dingle", meaning 'wooded valley'.

In 1908, Fleming donated the property to the citizens of Halifax for use as a park and proposed the construction of a tower within the "Dingle" to commemorate the 150th anniversary of the establishment of representative government in Nova Scotia; the province having been the first colony in the British Empire outside the United Kingdom to have such a form of government.

An ardent imperialist, Fleming also intended the proposed tower to serve as a memorial to the development of parliamentary institutions in the British Empire, now the Commonwealth. The plan was accepted by the City of Halifax and the local Canadian Club undertook a fundraising drive to raise money for construction. Donations were received from throughout the British Empire and plaques commemorating the contributions, as well as stones from all of the countries of the Empire were placed on the interior walls. 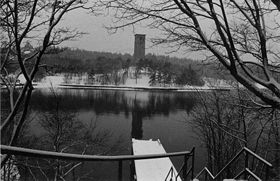 The ten-storey stone "Dingle Memorial Tower" was formally dedicated in an impressive ceremony in August 1912 by Canada's Governor General the Duke of Connaught who was Queen Victoria's son Prince Arthur. The presence of members of the Royal Family and dignitaries from other parts of the Empire emphasized the importance of the occasion.

Two large bronze lions at the foot of the tower were donated by the Royal Colonial Institute of London in 1913. They were designed by British sculptor, Albert Bruce-Joy and are similar to Sir Edwin Landseer's lions at Nelson's Column in Trafalgar Square.

The Dingle Memorial Tower is open to the public in the summer months and offers spectacular views of the city and Northwest Arm.

The water quality of the beach has been a long, contentious issue due to decades of raw sewage and pollution dumped into the harbour. However, recent reports suggest that the water may be safe to swim in, and further tests are currently in progress.[4] On August 1, 2008, the Dingle beach was opened to the public, however, it was closed once more after the new sewage treatment facility went offline in January 2009.[5] Swimmers should check the municipality's website, and note that users should not swim at the Dingle beach for three days after heavy rainfall.

The Dingle Tower is currently in the middle of a major restoration project and closed to the public. The project is being done by the skilled workers at Coastal Restoration and Masonry and the tower will be re-opened for the 100 anniversary in 2012.