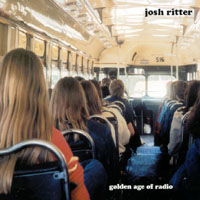 "Golden Age of Radio" is the second studio album by American . It was Ritter's first album to be released nationally after he was signed to . According to [http://www.joshritter.com his official website] , "Golden Age of Radio" was originally self-released in 2001 and passed out at shows. This self-pressed version contained a different, solo version of the title track called "Country Song," different mastering, and a different track order. [http://www.joshritter.com/album_gaor.shtml]

The album was received enthusiastically by critics, who frequently compared him to musicians such as [http://www.popmatters.com/music/reviews/r/ritterjosh-golden.shtml] , , and , but failed to reach a large audience in the United States. The album was a success in , where, thanks to good word-of-mouth and an opening spot on ' tour [http://www.triste.co.uk/jritter.htm] followed by frequent headlining gigs, Ritter is now considered "a minor celebrity." [http://www.allmusic.com/cg/amg.dll?p=amg&sql=10:fzftxqe0ldke~T1]

(All songs written by )