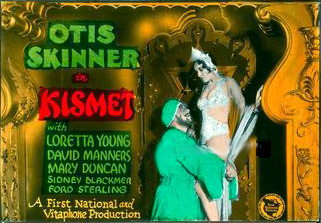 "Kismet" is a 1930 costume drama photographed entirely in an early widescreen process using 65mm film that was called . The film was based on Edward Knoblock's play. It had previously been filmed as a silent picture in 1920.

Warner Bros. spared no expense in making this picture. They spent $600,000 in producing this picture and the extravagance of the film was noted by every reviewer. The film played in ten cities across the United States in the wide-screen Vitascope (65mm) version while the rest of the country (which did not yet have theaters capable of playing widescreen films) were provided with standard 35mm prints.

At the time he played Hajj in the sound version, Otis Skinner was 72. This was his only feature-length sound film.

The film is believed to be lost. The enormous amount of content (especially in the sequences in the harem) probably contributed to this loss, as the film was condemned by the censors in 1935 and consequently became illegal to exhibit or view in the United States. Two considerably cleaned-up remakes, both in color, were made of the film, one in 1944 and the other in 1955. The 1955 version was an adaptation of the hit Broadway musical based on the play. Some sources claim that the original 1930 film featured sequences. The complete soundtrack survives on disks.