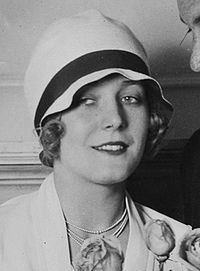 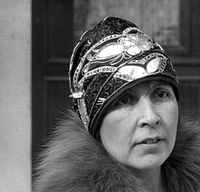 Cloche hat worn by woman in a 1920s photograph by Harry Walker.

The cloche hat is a fitted, bell-shaped hat for women that was invented by milliner Caroline Reboux in 1908, became especially popular during the 1920s, and continued to be commonly seen until about 1933.[1] Cloche is the French word for "bell".

During the early twentieth century, the popularity and influence of cloche hats were overwhelming. Couture houses like Lanvin and Molyneux opened ateliers to join milliners in manufacturing hats that precisely matched their clothing designs.[1] The hats even shaped hairstyles: the Eton crop (the short, slicked-down cut worn by Josephine Baker) became popular because it was ideal to showcase the hats' shape.[1]

Woman with a cloche hat

Cloche hats were usually made of felt so that they conformed to the head, and were typically designed to be worn low on the forehead, with the wearer's eyes only slightly below the brim.[1] In later years, a summer cloche might be made from sisal or straw. Cloches could also be made of beads or lace for evening wear, for cocktails, dancing or even for bridal wear.

The contemporaneous Art Deco style often impacted the outline of the brim or the style of seams. While commonly worn plain, allowing the cut and shape of a well-made hat to take precedence, a cloche could be decorated with appliqués, embroidery, jeweled brooches, scarves, fans of feathers, or similar accents.[2] By the end of the 1920s, it became fashionable to turn the brims on cloche hats upwards. This style remained prevalent until the cloche hat became obsolete around 1933 or '34.

Often, different styles of ribbons affixed to the hats indicated different messages about the wearer. Several popular messages included: An arrow-like ribbon which indicated a girl was single but had already given her heart to someone, a firm knot which signaled marriage or a flamboyant bow which indicated the wearer was single and interested in mingling.[2]

In the late 1980s, newly invented models of the cloche, such as Patrick Kelly's version with a buttoned brim, made a minor resurgence.[1]

Cloche hats were also featured in many designers' Fall 2007 collections; Elle magazine called the cloche hat the "haute accessory of the moment" in its September 2007 issue.[1] A cloche hat was worn by actress Angelina Jolie in the 2008 film Changeling, set in the late 1920s.

Following the cloche's resurgence in 2007, modern versions of the hat have emerged, often reflecting the region of the milliner. In 2009, Violina Couture Millinery of California introduced the demi-cloche, a variant of the cloche which allows more of the wearer's hair to be exposed.