Cockpit (sailing)
This article is about small enclosed area near the stern of a decked sailing ship. For other uses, see Cockpit (disambiguation). 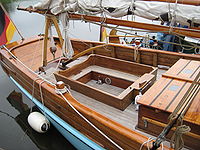 Cockpit of a small sailing boat

In the Royal Navy, the term cockpit originally referred to the area where the coxswain was stationed. This led to the word being used to refer to the area towards the stern of a small decked vessel that houses the rudder controls. The midshipmen and master's mates were berthed in the cockpit, and served as the action station for the ship's surgeon and his mates during battle.

In Patrick O'Brian's Aubrey-Maturin series of novels, set on Royal Navy ships during the Napoleonic Wars and the War of 1812, the cockpit plays a major role as Stephen Maturin's station in most of the battle scenes.