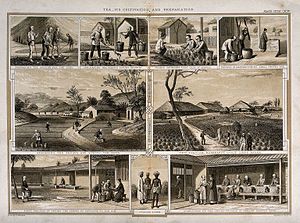 Tea processing is the method in which the leaves from the tea plant Camellia sinensis are transformed into the dried leaves for brewing tea. The categories of tea are distinguished by the processing they undergo. In its most general form, tea processing involves different manners and degree of oxidation of the leaves, stopping the oxidation, forming the tea and drying it. The innate flavour of the dried tea leaves is determined by the type of cultivar of the tea bush, the quality of the plucked tea leaves, and the manner and quality of the production processing they undergo. 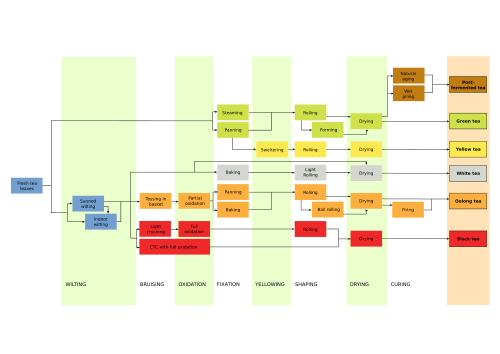 Although each type of tea has different taste, smell, and visual appearance, tea processing for all tea types consists of a very similar set of methods with only minor variations: 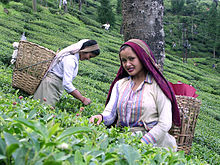 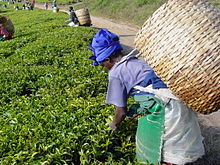 Without careful moisture and temperature control during its manufacture and life thereafter, fungi will grow on tea. This form of fungus causes real fermentation that will contaminate the tea and may render the tea unfit for consumption.

Tea is traditionally classified based on the degree or period of "fermentation" the leaves have undergone[8][9]: 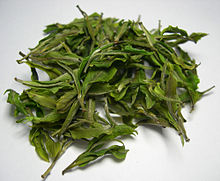 Organic Darjeeling White Tea processed at Arya Tea Estate in Darjeeling
White tea
Young leaves or new growth buds that have undergone minimal oxidation through a slight amount of withering before halting the oxidation with heat.[10][11] Withering of the leaves can last from around one to three days depending on the season and temperature of the processing environment.[11][12]. Though the young leaves may be shaped before drying, leaf buds processed into white tea are usually dried immediately after withering. The buds may be shielded from sunlight to prevent the formation of chlorophyll. White tea is produced in lesser quantities than most other styles, and can be correspondingly more expensive than tea from the same plant processed by other methods. It is less well known in countries outside of China, though this is changing with increased western interest in organic or premium teas.
Green tea
This tea has undergone the least amount of oxidation. The oxidation process is halted by the quick application of heat after tea picking, either with steam, the Japanese method, or by dry cooking in hot pans, the traditional Chinese method.[7] Tea leaves may be left to dry as separate leaves or they may be rolled into small pellets to make Gunpowder tea. This process is time consuming and is typically done with pekoes of higher quality. The tea is processed within one to two days of harvesting, and if done correctly retains most of the chemical composition of the fresh leaves from which it was produced.[7]
Oolong tea
This tea's oxidation is stopped somewhere between the standards for green tea and black tea. The processing typically takes two to three days from withering to drying[1] with a relatively short oxidation period[7] of several hours. In Chinese, semi-oxidized teas are collectively grouped as blue tea (青茶, literally: blue-green tea / "celadon tea"), while the term "oolong" is used specifically as a name for certain semi-oxidized teas.[13] Common wisdom about lightly oxidized teas in Taiwan (a large producer of Oolong) is that too little oxidation upsets the stomach of some consumers. Even so, some producers attempt to minimize oxidation in order to produce a specific taste.
Black tea
The tea leaves are allowed to completely oxidize. Black tea is the most common form of tea in southern Asia (Sri Lanka, India, Pakistan, Bangladesh, etc.) and in the last century many African countries including Kenya, Burundi, Rwanda, Malawi and Zimbabwe. The literal translation of the Chinese word is red tea, which is used by some tea lovers. The Chinese, Japanese, and Koreans call it red tea because the actual tea liquid is red. Speakers of many other languages call it black tea because the tea leaves used to brew it are usually black. However, red tea may also refer to rooibos, an increasingly popular South African tisane. Black tea is first withered to induce protein breakdown and reduce water content (68-77% of original), heavily rolled or torn to bruise and disrupt the leaf cell structures and activate oxidation.[3][7] The oxidation process takes between 45–90 minutes[7] to 3 hours[3] and is done at high humidity between 20-30 degrees Celsius, transforming much of the catechins of the leaves into complex tannin.[7] 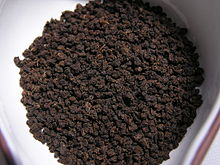 Black tea produced through CTC processing
Black tea is further classified as either orthodox or as Crush, Tear, Curl (CTC), a production method developed around 1932. Unblended black teas are also identified by the estate they come from, their year and the flush (first, second or autumn). Orthodox processed black teas are further graded according to the post-production leaf quality by the Orange Pekoe system, while CTC teas use a different grading system.[14]
Post-fermented tea
Teas that are allow to undergo a second oxidation after the fixation of the tea leaves, such as Pu-erh, Liu'an, and Liubao, are collectively referred to as secondary or post-fermentation teas in English.[15] In Chinese they are categorized as Dark tea or black tea. This is not to be confused with the English term Black tea, known in Chinese as red tea. Pu-erh, also known as Póu léi (Polee) in Cantonese is the most common type of post-fermetation tea in the market.
Yellow tea
This tea is processed in a similar manner to green tea, but instead of immediate drying after fixation, it is stacked, covered, and gently heated in a humid environment. This initiates oxidation in the chlorophyll of the leaves through non-enzymatic and non-microbial means, which results in a yellowish or greenish-yellow colour.[5] This tea is popular in Japanese tea ceremonies due to its appearance, but the flavor as well is distinctive. The name derives from this "yellowing" process, and possibly includes a reference to the colour yellow which indicates the emperor, as this was a tea popular at court ceremonies for its bright colour and smooth pouring before the Imperial court.