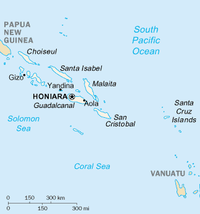 Map of the Solomon Islands

Deep seated problems of land alienation dating from colonialism, unresolved after independence have led to a number of compensation claims on land use.

According to "Peacemaking in Solomon Islands: The experience of the Guadalcanal Women for Peace movement" by Dalcy Tovosia Paina, School of Education, Solomon Islands College of Higher Education,

"The Honiara Peace Accord that was signed by the warring parties (Guadalcanal and Malaita), the government and the Commonwealth Special Envoy (Major Sitiveni Rabuka) recognised several root causes of the conflict:

The warring parties mentioned were mainly the Solomon Islands Government, the Isatabu Freedom Movement and the Malaita Eagle Force led by, among others, Jimmy Rasta.

A sizeable international security contingent of 2,200 police and troops, led by Australia (under the Australian Federal Police and Australian Defence Force name Operation Anode)[1] and New Zealand, and with representatives from about 6 other Pacific nations began arriving on 24 July 2003.

Military personnel provide security, material and logistical assistance to police forces assisting the Solomon Islands Government in the restoration of law and order. From November 2003, the military component was reduced, as stability gradually returned to the country, and a sizeable civilian contingent, composed of economists, development assistance specialists and budget advisors commenced the reconstruction of the government, economy and finances of the Solomon Islands. The civilian contingent is now made up of around 130 personnel from many pacific countries, the most sizeable being Australia and New Zealand. Early successes included the stabilisation of government finances and normalisation of debt, as well as a number of economic reforms. Civilians in RAMSI are now focussing on capacity building of Solomon Islanders to take over the roles. Difficulties include the lack of available skilled Solomon Islanders.

Former Solomon Islands Prime Minister Manasseh Sogavare was outspoken in his criticism of RAMSI, which he accused of being dominated by Australia and of undermining the Solomons' sovereignty.[3][4][5] By contrast, his successor Prime Minister Derek Sikua has stated he supports RAMSI,[6] and has criticised his predecessor, saying in January 2008: "I think for some time in the last 18 months, the Solomon Islands government was preoccupied with finding fault in RAMSI."[7] Sikua has stated:

"[We will] provide leadership that will work closely with RAMSI to achieve clearly stated and agreed objectives for the long-term benefit of Solomon Islands. [...] RAMSI is here on our invitation. [...] [The mission] is important to Solomon Islands as it provides security, development of our police service, and the strengthening of the capacity of government institutions."[8]

Sikua has also asked RAMSI to assist the Solomons' rural areas "in the health sector and in the education sector as well as in infrastructure and other sectors to do with income generation and economic activities".[9]

In the early hours of 22 December 2004, Australian Protective Service Officer Adam Dunning was ambushed and killed while on a routine vehicle patrol with another officer in Honiara. Within 24 hours, a rifle company group from the 1st Battalion, Royal Australian Regiment was flown into the Solomon Islands.

Results of the gun amnesty in 2003

In early January 2005, a joint operation between the Royal Solomon Islands Police (RSIP) and Participating Police Force (PPF) resulted in the arrest of James Tatau. Tatau was charged with Dunning's murder, the attempted murder of his colleague, and an earlier shooting incident on a Participating Police Force (PPF) vehicle, in which a bullet narrowly missed two PPF officers.

After the arrest, the military presence within RAMSI was again reduced. As of 2005, the five troop-contributing nations (Australia, New Zealand, Papua New Guinea, Fiji and Tonga) together provided approximately 40 personnel to support the PPF. There are currently around 200 troops stationed in Solomon Islands, who regularly conduct patrols in the capital, Honiara and throughout the provinces.

Solomon Islanders James Tatau and John Hen Ome were acquitted after standing trial for the killing of Adam Dunning in May 2007.[10]

On 18 April 2006 Snyder Rini was elected Prime Minister of the Solomon Islands in a general election. This sparked rioting in Honiara amidst allegations that the election was fixed with the aid of money from Chinese businessmen. Parts of Honiara were razed and looted, with Chinese-owned property particularly targeted.[11] With up to 90% of their shops burnt down in Chinatown, most Chinese have evacuated the country in fear of their personal safety. Snyder Rini resigned on the floor of Parliament on 26 April after just eight days as Prime Minister and as MPs were due to vote on a motion of no confidence against him.

In response, from 20 April 2006, RAMSI forces were rapidly bolstered by a further 220 Australian troops. New Zealand sent a further rifle company and 30 police to increase its RAMSI contribution to around 160 troops and 67 police.[12][13]