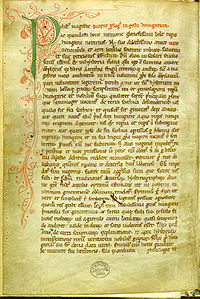 First page of the manuscript

Gesta Hungarorum (Latin for The Deeds of the Hungarians) is a record of early Hungarian history by an unknown author who describes himself as Anonymi Bele Regis Notarii ('the anonymous notary of king Bela'), but is generally cited as Anonymus. Anonymus was schooled at the University of Paris and was employed at the time of writing as a notarias, presumably in the court of Bela III of Hungary (1172–1196).[1] The chronicle was written probably between 1196 and 1203,[2] though some scholars claim that its author wrote the Gesta earlier in the 12th century.[3] Gesta Hungarorum is preserved in a manuscript from about 1200 and it was published for the first time in 1746, by J.G. Schwandtner.

The chronicle was written as a literary work based on similar western chronicles that were then in fashion. The author describes all the local ruling families of the Kingdom of Hungary as being descended from the ruling Árpáds or at least from their allies, and aims to glorify the merits of the Árpáds with respect to the tenth-century Magyar occupation of the Transylvania part of the Carpathian basin. This chronicle describes the opposition of the local rulers Gelou, Glad and Menumorut in Transylvania at the arrival of the Magyars in the 10th century. Though the very existence of these rulers is debated. 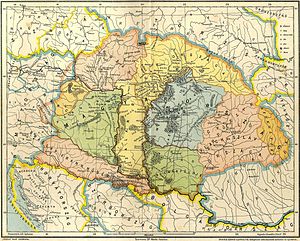 According to Carlile Aylmer Macartney, the work is the most famous, the most obscure, the most exasperating and most misleading of all the early Hungarian texts.[5]

Though this is a historical manuscript written under the aegis of the Hungarian king, some Hungarian historians have considered it to consist of inventions by the author or his predecessors. Some of the work is recognizably based directly on earlier sources that narrate the history of the Magyar peoples that invaded the Carpathian basin. Paul Robert Magocsi from the University of Toronto described the Gesta Hungarorum as an unreliable work.[6] In a more recent work of professor Magocsi and Ivan Pop it is stated that the view of modern historians on the Gesta Hungarorum is mixed: some consider it a reliable source; others (among them historian Aleksei L. Petrov) consider its information doubtful.[7] Magocsi quoted authors referring to the Gesta Hungarorum as a source in one of his recent works also mentioning authors critical of its reliability.[8]

The Gesta does not discuss the 200 years of history between the era of Hunnish king Attila and Hungarian prince Árpád. The Gesta also states that Árpád is a great grandson of king Attila.[9]

According to Martyn Rady, Anonymus’s "account pretends to give a historically-grounded account of early Hungarian history... but does in fact nothing of the sort. Anonymus’s account is essentially a ‘toponymic romance’ that seeks to explain place-names by reference to imagined events and persons. Although he gets the names of the earliest Hungarian rulers right, as well as some of the early tribal chieftains, he has the Hungarians beating Slavonic and Romanian leaders whose names are not attested to anywhere else, as well as fighting the Cumans (who appeared in Europe only in the late 11th century) and even the Romans". Clearly, there is a bit of correct history in Anonymus's work, and at least a few of his heroes can be 'cross-checked' against information given by Constantine Porphyrogenitus, Liudprand of Cremona and the Annals of St Gall.[10] Gesta Hungarorum's main subject of controversy concerns the mentioning of the existence of the local rulers Gelou, Glad and Menumorut in Transylvania at the arrival of the Magyars in the 10th century. The very existence of these three dukedoms mainly inhabited by Vlachs and Slavs is disputed.

Romanian historians who accept the credibility of the gesta point out that it is the earliest preserved Hungarian chronicle and thus it must have based on earlier Hungarian gestas, and therefore its factual accuracy is likely high.[11] They also point out that the gesta was written at least 130 years before the Chronicon Pictum. They emphasize that Anonymous uses many Greek sayings which suggest that he was one of the few Hungarian authors who knew Greek, and thus he could base much of his work on earlier Byzantine sources.[12][unreliable source?] They also claim that the author of the gesta simply confused the Cumans with the Pechenegs[11] or possibly the Khazars[13] Furthermore, passages from the Gesta are repeated in later chronicles, such as Simon de Keza's works. Most of the sites mentioned by Anonymous in his work have been archaeologically attested.[14] The Gesta Hungarorum is also properly portrayed the path of conquest taken by the Magyars, entering first into Pannonia, then in Transylvania.[15]

The main arguments against their existence is the presence of provably wrong information in some other parts of the Gesta, and the fact that Gesta Hungarorum mentions Cumans among the peoples who lived in Transylvania at that time, whereas the Cumans actually arrived there 150 years after the Hungarians. There is opposing opinion which claims that the author of the Gesta actually confuses Cumans with Pechenegs, who spoke a similar language to that of the Cumanians and lived in approximately the same territory before Hungarians.

Authors who dispute the credibility[6] of the Gesta point out that the author probably had no information (apart from some familial and tribal legends) regarding the actual circumstances of the conquest.[3][16] Thus he invented enemies and rivals for his heroes to vanquish; he casually borrowed the names of rivers (Laborc), mountains (Tarcal and Zobor), and castles (Gyalu) to conjure up knights and chieftains (e.g., the Bulgarian Laborcy, the Cuman Turzol, the Czech Zobur, and the Vlach Gelou) who are not mentioned in other primary sources.[3][16] They also emphasize that Anonymus obviously had no knowledge of the settlers' real enemies (e.g., Svatopluk II, Emperor Arnulf I, the Bulgar Tzar Simeon); of the settlers' actual adversaries, which included the Moravians, Slovenes, Karantans, Franks, and Bavarians, he knew only of the Bulgarians.[3][16] Thus he arbitrarily counted among the Hungarians' opponents the Czechs, who at the time lived exclusively in the Czech Basin; the Cumanians, who moved to Europe only in the 11th century; and the Vlachs which suggest that his choices reflect the ethnic and political realities of the 12th century.[3][16] The author thought Kende had been the father of Kurszán.[17] In fact "kende" was a title of a Hungarian dignitary, probably the sacral ruler.[17] 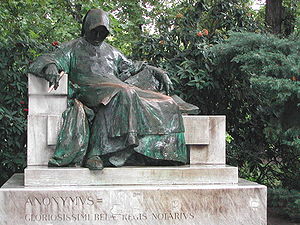 Statue of the anonymous author in Budapest's Vajdahunyad Castle

Hypotheses as to the identity of the author, Magister P include: