Mercer County is a county located in the U.S. state of Pennsylvania. As of 2010, the population was 116,638. Its county seat is Mercer;[1] Sharon is its largest city.

Mercer County was part of the Sharon MSA as designated by the U.S. Census Bureau until the 2000 census, when it was appended to the Youngstown-Warren-Boardman, OH-PA MSA.

Mercer County was previously considered a political bellwether for the state of Pennsylvania since its demographics, urban/rural ratio, and party affiliation once closely mirrored the state as a whole. In 2000 Al Gore carried it against George W. Bush. This trend failed to hold true during the most recent 2004 Presidential election and 2008 Presidential election, in which Mercer County voted more conservatively than the rest of the state. In 2004 George W. Bush won Mercer County with 51% of the vote. That year John Kerry won the state as a whole with 51% of the popular vote. In 2008 John McCain won Mercer County by fewer than 200 votes with John McCain and Barack Obama each receiving roughly 49% of the popular vote. Barack Obama won the state of Pennsylvania as a whole with 55% of the popular vote. Each of the three state row office winners also carried Mercer in 2008. 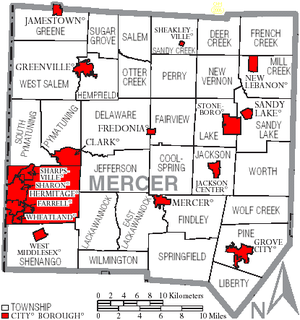 Under Pennsylvania law, there are four types of incorporated municipalities: cities, boroughs, townships, and, in one case, towns. The following cities, boroughs and townships are located in Mercer County: 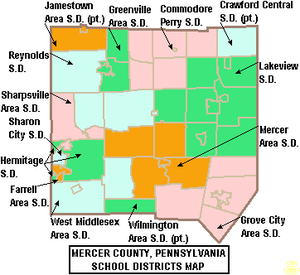 The Wendell August Forge, the last remaining working forge in the state, was open to the public for tours, but it burned down on March 6, 2010.[8]