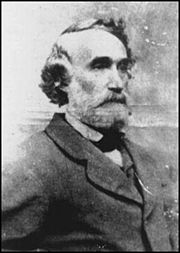 Charles Clark (May 24, 1811 – December 18, 1877) was a Mississippi Democratic political figure, as well as a major general in the Confederate States Army during the American Civil War.

Clark was born in Cincinnati, Ohio, in 1811. He subsequently moved to Mississippi.

In the late 1830s and early 1840s, Clark, a lawyer, represented a settler in a dispute with some Choctaw Native Americans over land in the Mississippi Delta. The dispute led to a series of lawsuits before the Mississippi Supreme Court. The settler ultimately prevailed, and gave Clark a large tract of land between Beulah, Mississippi and the Mississippi River as his legal fee. In the late 1840s, Clark formed a plantation on the land, naming it Doe-Roe, pseudonyms commonly used in the legal profession to represent unnamed or unknown litigants (e.g., John Doe, Roe v. Wade). The state of literacy being what it was at the time, however, the plantation came to be known by its phonic representation, Doro. According to archives at Delta State University, "The plantation grew to over 5,000 acres (20 km2) and became the most prosperous in the region, operating until 1913. It was prominent in the social, political and economic affairs of Bolivar County."[1]

Following the secession of Mississippi in early 1861, Clark was appointed as a brigadier general in the Mississippi 1st Corps, a state militia organization that later entered the Confederate Army. He commanded the brigade at engagements in Kentucky and then a division under Leonidas Polk at the Battle of Shiloh. He was promoted to the rank of major general of Mississippi State Troops in 1863. Clark led a division at the Battle of Baton Rouge, where he was severely wounded and captured. He spent time as a prisoner of war before being released.

On November 16, 1863, Clark was inaugurated as governor of Mississippi under Confederate auspices. He served in this capacity until June 13, 1865, when he was forcibly removed from office by occupation forces of the United States Army and replaced by William L. Sharkey, a respected judge and staunch Unionist who had been in total opposition to secession. Clark was imprisoned at Fort Pulaski near Savannah, Georgia.

He died in Bolivar County, Mississippi, on December 18, 1877, and was buried at the family graveyard in that county.[2]