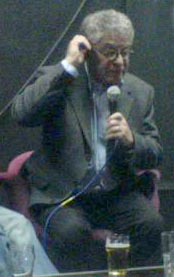 Eduard van Thijn (born , in ) is a Dutch . Of Jewish ancestry, he and his mother were imprisoned in the Westerbork concentration camp during , and also spent 18 months in hiding. After the war, he studied political science and social science at the City University of Amsterdam.

Van Thijn began his political career as a councillor in the city government of Amsterdam. He subsequently served in the "" (lower house) of the Dutch Parliament.

Van Thijn has been married three times. He and his first wife Marion had two children. He was in a relationship with the politician Hedy d'Ancona during the 1970's. From 1983 to 1990, his second marriage was to Eveline Herfkens, herself a politician. He married Odette Taminiau, his third wife, in 1992.