Typical cyclic voltammogram where ipc and ipa show the peak cathodic and anodic current respectively for a reversible reaction. 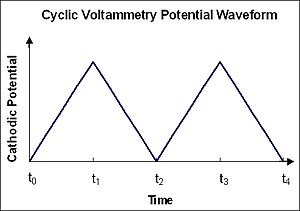 In cyclic voltammetry, the electrode potential ramps linearly versus time as shown. This ramping is known as the experiment's scan rate (V/s). The potential is applied between the reference electrode and the working electrode and the current is measured between the working electrode and the counter electrode. This data is then plotted as current (i) vs. potential (E). As the waveform shows, the forward scan produces a current peak for any analytes that can be reduced (or oxidized depending on the initial scan direction) through the range of the potential scanned. The current will increase as the potential reaches the reduction potential of the analyte, but then falls off as the concentration of the analyte is depleted close to the electrode surface. If the redox couple is reversible then when the applied potential is reversed, it will reach the potential that will reoxidize the product formed in the first reduction reaction, and produce a current of reverse polarity from the forward scan. This oxidation peak will usually have a similar shape to the reduction peak. As a result, information about the redox potential and electrochemical reaction rates of the compounds are obtained.

For instance if the electronic transfer at the surface is fast and the current is limited by the diffusion of species to the electrode surface, then the current peak will be proportional to the square root of the scan rate. This relationship is described by the Cottrell equation.

The utility of cyclic voltammetry is highly dependent on the analyte being studied. The analyte has to be redox active within the experimental potential window. It is also highly desirable for the analyte to display a reversible wave. A reversible wave is when an analyte is reduced or oxidized on a forward scan and is then reoxidized or rereduced in a predictable way on the return scan as shown in the first figure.

Even reversible couples contain polarization overpotential and thus display a hysteresis between absolute potential between the reduction (Epc) and oxidation peak (Epa). This overpotential emerges from a combination of analyte diffusion rates and the intrinsic activation barrier of transferring electrons from an electrode to analyte. A theoretical description of polarization overpotential is in part described by the Butler-Volmer equation and Cottrell equation. Conveniently in an ideal system the relationships reduces to,

Reversible couples will display a ratio of the peak currents passed at reduction (ipc) and oxidation (ipa) that is near unity (1 = ipa/ipc). This ratio can be perturbed for reversible couples in the presence of a following chemical reaction, stripping wave, or nucleation event.

When such reversible peaks are observed thermodynamic information in the form of half cell potential E01/2 can be determined. When waves are semi-reversible such as when ipa/ipc is less than or greater than 1, it can be possible to determine even more information especially kinetic processes like following chemical reaction.

When waves are non-reversible it is impossible to determine what their thermodynamic E01/2 is with cyclic voltammetry. This E01/2 can be determined, however it often requires equal quantities of the analyte in both oxidation states. When a wave is non-reversible cyclic voltammetry can not determine if the wave is at its thermodynamic potential or shifted to a more extreme potential by some form of overpotential. The couple could be irreversible because of a following chemical process, a common example for transition metals is a shift in the geometry of the coordination sphere. If this is the case, then higher scan rates may show a reversible wave. It is also possible that the wave is irreversible due to a physical process most commonly some form of precipitation as discussed below. Some speculation can be made in regards to irreversible waves however they are generally outside the scope of cyclic voltammetry.

Common materials for working electrodes include glassy carbon, platinum, and gold. These electrodes are generally encased in a rod of inert insulator with a disk exposed at one end. A regular working electrode has a radius within an order of magnitude of 1 mm. Having a controlled surface area with a defined shape is important for interpreting cyclic voltammetry results.

To run cyclic voltammetry experiments at high scan rates a regular working electrode is insufficient. High scan rates create peaks with large currents and increased resistances which result in distortions. Ultramicroelectrodes can be used to minimize the current and resistance.

Reference electrodes are a complex subject and worth investigating elsewhere.

In some experiments an electroactive species is fixed to the surface of the electrode, for instance in microparticle voltammetry.

Potentiodynamic techniques also exist that add low-amplitude ac perturbation to a potential ramp and measure variable response in a single frequency (ac voltammetry) or in many frequencies simultaneously (potentiodynamic electrochemical impedance spectroscopy).[4] The response in alternating current is two-dimensional – it is characterised by amplitude and phase. The amplitude and phase depend differently on frequency for constituents of ac response attributed to different processes (charge transfer, diffusion, double layer charging, etc.). Frequency response analysis enables simultaneous monitoring of the various processes that contribute to the potentiodynamic ac response of electrochemical system.

Cyclic voltammetry is not a hydrodynamic technique. In a hydrodynamic technique flow is achieved at the electrode surface by stirring the solution, pumping the solution, or rotating the electrode as is the case with rotating disk electrodes and rotating ring-disk electrodes. These techniques target steady state conditions which appear the same scanned from the positive or the negative, thus limiting them to linear sweep voltammetry.