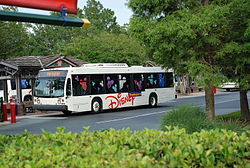 Except where monorail or ferry service exists or walking is practical, direct bus service is provided from every hotel to every attraction, and between attractions. This contrasts with most public transportation systems, which use a hub-and-spoke system. Disney's approach avoids transfers for most movements, but leads to longer wait times. However, Disney tries to keep wait times below twenty minutes. Direct transportation between hotels is not provided, unless they happen to be on the same bus route.

No service is provided between Downtown Disney and other attractions, except Typhoon Lagoon which lies on the same route. When this was offered, guests parked for free at Downtown Disney to avoid paying for parking at the theme parks.

The resort also maintains a fleet of watercraft providing additional access between various Disney resorts and parks. While some route duplication does take place, the watercraft provide an alternative way to travel from one location to another. The most notable of these boats are the large ferries that traverse the Seven Seas Lagoon between the Transportation and Ticket Center and the Magic Kingdom. However, there are several other routes, including: