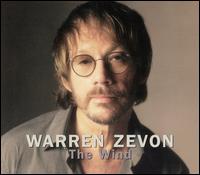 "The Wind" is the last studio by American , released in 2003. It was released just two weeks before his death on (see ). The title track was not included on the album, but was released on the tribute album "", performed by .