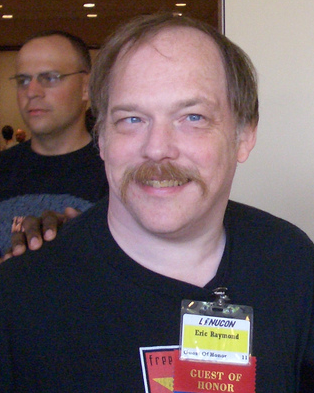 Eric Steven Raymond (born December 4, 1957), often referred to as ESR, is a , author and advocate. His name became known within the when he became the maintainer of the "". After the 1997 publication of "", Raymond became, for a number of years, an informal representative of the open source movement.

Born in in 1957, Raymond lived in Venezuela before settling in in 1971. [cite web | url = http://www.laweekly.com/art+books/cyber/man-against-the-fud/6614/ | title = Man Against the FUD | accessdate = 2008-07-07 ] Raymond says his mild form of congenital motivated him to pursue a future in computing; [ [http://archive.salon.com/21st/feature/1998/04/cov_14feature.html Let my software go!] , Salon.com] his involvement with hacker culture began in 1976, and he contributed to his first project in the late 1980s. His primary contributions to open source software have been maintaining the email client for a certain time, and . Other contributions have included editing modes and portions of libraries like GNU ncurses, giflib/libungif, and . He also wrote CML2, a source code configuration system; while originally intended for the , it was rejected by kernel developers. [cite web | url = http://kerneltrap.org/node/17 | title = CML2, ESR, & The LKML | work = KernelTrap | date = 2002-02-17 ] Raymond attributed this rejection to "kernel list politics". [ cite web | url= http://www-106.ibm.com/developerworks/linux/library/l-ivesr.html?ca=dgr-lnxw09EricRaymond | title = Interview: Eric Raymond goes back to basics | work = IBM developerWorks | first = Rob | last = McMillan ]

Raymond is the author of a number of documents and s, many of which are included in the corpus. [cite web | url = http://www.catb.org/~esr/faqs/ | title = Eric Raymond's FAQ collection | accessdate = 2007-02-25 ] Raymond's 2003 book "" covers Unix history and culture, and modern user tools available for programming and accomplishing tasks in Unix. Raymond has also been the editor of the since he adopted it in 1990.

Raymond coined the "Given enough eyeballs, all bugs are shallow." He credits with the inspiration for this quotation, which he dubs "". The quotation appears in "The Cathedral and the Bazaar", published in 1997. [ cite web | url = http://www.catb.org/~esr/writings/cathedral-bazaar/cathedral-bazaar/ar01s04.html | title = Release Early, Release Often | work = The Cathedral and the Bazaar | last = Raymond | first = Eric S | accessdate = 2007-02-25 ] Raymond became a prominent voice in the open source movement and co-founded the in 1998. He also took on the self-appointed role of ambassador of to the press, business and public. The release of the (then Netscape) source code in 1998 was an early accomplishment. He accepted s from to provide credibility to the company and act as a hired "corporate conscience" [ [http://linuxtoday.com/news_story.php3?ltsn=1999-12-10-001-05-NW-LF Eric S. Raymond -- Surprised By Wealth] , [http://lwn.net/2001/0222/a/esr-hard-times.php3 ESR hard times] ] and has spoken in more than fifteen countries on six continents including a lecture at . [ [http://www.techweb.com/wire/story/TWB19990615S0032 Open Source Advocate Invited To Microsoft] ]

Raymond has had a number of public disputes with other figures in the . He has rejected what he describes as the "very seductive" moral and ethical rhetoric of and the , asserting that this is "not because his principles are wrong, but because that kind of language ... simply does not persuade anybody."

Raymond addressed some of his critics from the software development community in his 1999 essay "Take My Job, Please!", [ [http://www.catb.org/~esr/writings/take-my-job-please.html Take my job, please.] , Eric Raymond.] stating that he was willing to "back to the hilt" anyone qualified and willing to take his job and present the case for open source to the world. In February 2005, Raymond stepped down as the president of the .