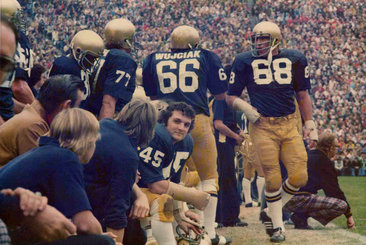 Daniel Eugene "Rudy" Ruettiger (b. , in , ) is a motivational speaker best known as the inspiration for the motion picture "Rudy".

Daniel Ruettiger (nicknamed "Rudy") grew up in a middle class household, the third of fourteen children. He attended , where he played for locally famous coach Gordie Gillespie and led the team in tackles his junior and senior years. After graduating from high school, Ruettiger worked in a steel mill where a close friend and mentor died in a explosion influencing him to attend Holy Cross Junior College in .

After two years at Holy Cross, and three rejections to transfer to the , Ruettiger was accepted as a student in the of . It was during his time studying at Holy Cross that Ruettiger discovered he suffered from .

Ruettiger harbored a dream to play for and the Fighting Irish football team, despite being 5' 7" and 165 pounds (far shorter and lighter than would be expected of a collegiate football player). [ [http://www.rudyinternational.com/truestory1.cfm Rudy international ] ] Parseghian encouraged walk-on players from the student body. For example, Notre Dame's 1969 starting center, , was a walk-on who eventually won a Rhodes Scholarship and an NFL contract with the [ [http://nd.edu/~ndmag/su2002/oriard.html It's Not All Fun and Games: college athletics, Notre Dame Magazine Online, summer 2002 ] ] .

Ruettiger earned a place on the Notre Dame scout team, a practice-squad that helps the varsity team practice for games. Merv Johnson was the coach that was instrumental at keeping Rudy on as a scout team player.

After Parseghian stepped down after the 1974 season, was named head coach. In Ruettiger's last opportunity to play for Notre Dame at home, Devine put him into a game at defensive end against on , . In the movie "Rudy", Devine is depicted as a villain, not wanting Rudy to dress for his last game; however, during the actual game, Devine reportedly came up with the idea to dress Rudy. In the final play of Ruettiger's senior season with the Fighting Irish, he recorded a sack, which is all his Notre Dame stat line has ever shown. Ruettiger was carried off the field by his teammates following the game. Ruettiger actually played for two plays. The first time he was unable to get to the quarterback, but on the second play he sacked the Georgia Tech quarterback. [ [http://www.youtube.com/watch?v=1wpzcWJtLys Actual footage of Daniel "Rudy" Ruettiger recording the final sack for Notre Dame against Georgia Tech on November 8th, 1975.] ]

He and fullback Marc Edwards are the only players in Notre Dame history ever to be carried off the field by his teammates.

On , , Ruettiger was the master of ceremonies at a for Notre Dame Football. The Fighting Irish were about to play rival and then #1-ranked (USC) the following day and Head Coach asked some Notre Dame legends, including and , to come back and speak at the rally. Ruettiger came out of the tunnel at Notre Dame Stadium to a loud ovation. [ [http://www.msnbc.msn.com/id/9707335/ "One for the ages: USC edges Notre Dame: Leinart pulls trickery with 3 seconds left, Bush scores 3 TDs in 34-31 win"; msnbc.com] ]

Ruettiger is currently married and has two children.

Ruettiger's story was told in the film "Rudy", which starred actor in the title role. The film was written by Angelo Pizzo, directed by and produced by Rob Fried, the award-winning team that created "". Ruettiger appeared in a cameo as a fan behind Rudy's dad in the final game scene.Fact|date=September 2008