Guitar Center is the largest chain of musical instrument retailers in the world with 223 locations throughout the United States.[1] Its headquarters is in Westlake Village, California.

Founded in Hollywood by Wayne Mitchell in 1959 as The Organ Center, a retailer of electronic organs for home and church use, it became a major seller of Vox electric guitars and guitar amplifiers, changing its name to The Vox Center in 1964. Toward the end of the 1960s, Vox—whose sales derived largely from its association with The Beatles, who made extensive use of its amplifiers—fell in popularity as Marshall amplifier users Eric Clapton and Bob Marley captured musicians' imaginations. Accordingly, Mitchell once again changed the name, this time to Guitar Center.[1][2]

The popularity of rock and roll in the 1970s allowed Mitchell to open stores in San Francisco and San Diego, as well as several suburbs of Los Angeles. Ray Scherr, previously the general manager of the San Francisco store, purchased the company from Mitchell in the late 1970s. Scherr owned and operated it until 1996 from its Westlake Village headquarters.

Although synthesizer-driven disco and New Wave pop sapped rock's audience in the late 1970s, the 1970s "guitar rock" revival led by Van Halen and a concurrent influx of Japanese-produced instruments brought guitar sales to unprecedented levels.[3] Guitar Center took full advantage of this sales bonanza, and by the end of the decade began an ambitious program of expansion across the entire United States.[4] Using its size as leverage over the musical instrument business, it developed into the largest musical instrument retailer in the country, and made an initial public offering of stock in 1997.[5]

Activision partnered with Guitar Center in 2006; all purchases made during game play of Guitar Hero, beginning with the second installment, are made in a virtual Guitar Center store.

Guitar Center also hosts annual events such as the Drum Off, King of the Blues, contests, and artist appearances throughout the nation.[8] 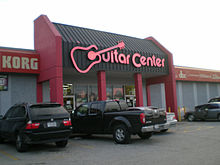 In the summer of 2006, Guitar Center purchased four stores in Texas from the popular South Texas and Central/South American company, Hermes.[12] 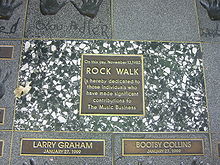 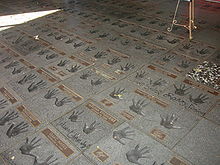 The Sunset Boulevard location in Los Angeles hosts Hollywood's RockWalk, a hall of fame honoring musical artists.[13] Artists are invited to place their handprints into cement blocks that are put on display at the Guitar Center.[13]