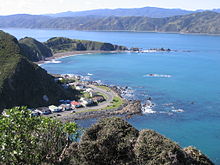 View of Point Dorset and Breaker Bay on the Miramar Peninsula. 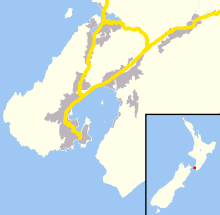 The Miramar Peninsula (originally "Whataitai" and later "Watt's Peninsula"[1]) is a peninsula at the southeastern end of the city of Wellington, New Zealand.

The peninsula is 800 hectares[2] and contains the suburbs of Miramar, Maupuia, Strathmore and Seatoun. The isthmus connecting the peninsula to the rest of Wellington separates Evans Bay to the north from Lyall Bay to the south, and is the location of Wellington International Airport. The peninsula was an island until an earthquake in the fifteenth century.

In Maori legend, Miramar was formed by the corpse of the taniwha Whaitaitai who died as he tried to escaped the harbour[3].

To the east of the peninsula is the entrance to Wellington Harbour, which opens into Cook Strait at its southern end. The notorious rocks of Barrett Reef lie close to the shore of the peninsula.

The peninsula was originally called Watt's Peninsula. In 1872 the first settler in the area, James Coutts Crawford, changed the name to Miramar - which means "behold the sea" or "wonderful sea".

Film director Peter Jackson has built a multi-million dollar series of studios, sound stages, pre- and post-production facilities in Miramar. The famous Weta Workshop that is involved in many movies directed by Peter Jackson, such as The Lord of the Rings film trilogy and King Kong, is also in Miramar.