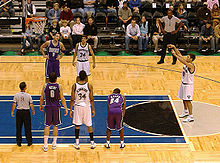 In basketball, free throws or foul shots are unopposed attempts to score points from a restricted area on the court (the free throw line; informally known as the foul line), and are generally awarded after a foul on the shooter by the opposing team. Each successful free throw is worth one point.

Free throws can normally be made at a high percentage by good players. In the NBA, most players make between 70-80% of their attempts. Some good shooters (such as Dirk Nowitzki, Steve Nash, José Calderón, Rick Barry, Mark Price, Chauncey Billups, Mo Williams, and Ray Allen) can make as many as 90-95%, while notoriously poor shooters (e.g. Shaquille O'Neal, Ben Wallace, Bill Russell, Wilt Chamberlain, or Andris Biedriņš) may struggle to make 50% of them. During a foul shot, a player's foot must be completely behind the foul line. If a player lines up with part of their foot on the line, a foul is called and the other team gains possession. Foul shots are worth 1 point.

Tall players often shoot free throws poorly; though theoretically, taller players should be better at making them.[1] One possible explanation for this is that the high release point of their shots can cause them to stand overly erect.[2] Hall of Famer Wilt Chamberlain made just 51.1% of his free-throw attempts, one of the lowest percentages of all time,[3] and the poor free throw shooting of players such as O'Neal and Wallace, have led to the 'Hack-a-Shaq' and other intentional fouling tactics. On the other hand, there have also been big men who have been prolific scorers from free throws, who not surprisingly also have good outside shooting range (an example is Dallas Mavericks forward Dirk Nowitzki who, at 7 feet tall, has a career average of 88% (.877).)

When free throws are awarded 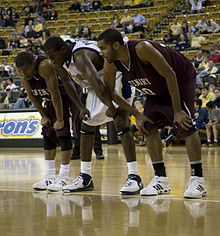 Players waiting on the side during a free throw at a Georgia Tech Yellow Jackets vs Centenary Gentlemen college basketball game.

There are many situations when free throws can be awarded:

The first and most common is when a player is fouled while in the act of shooting. If the foul causes the player to miss the shot, the player receives two or three free throws depending on whether the shot was taken in front of or behind the three-point line. If, despite the foul, the player still makes the attempted shot, the number of free throws is reduced to one, and the basket counts. This is known as a three-point or four-point play, depending on the value of the made basket. Commentators sometimes refer to a successful three-point play as "an old-fashioned three-point play", "a three pointer the hard way" because before the advent of the three-point shot, this was the only way to earn three points on one play, or "And-1", because they made the shot and will get one free throw.

The second is when the fouling team is in the team bonus (or foul penalty) situation. This happens when, in a single period, a team commits a set number of fouls whether or not in the act of shooting. In the NBA, the limit is four fouls per quarter; starting with the fifth foul, or the second in the final 2 minutes if the team has less than 5 fouls, the opposing team gets two free throws. In NCAA basketball, beginning with the seventh foul of the half, one free throw is awarded; if the player makes the free throw, another is given. This is called shooting a "one-and-one". Starting with the tenth foul of the half, two free throws are awarded. Free throws are not awarded for offensive fouls (most often charging fouls), even if the team fouled is in the bonus. The number of fouls that triggers a penalty is higher in college basketball because the game is divided into two 20-minute halves, as opposed to quarters of 10 minutes in FIBA play or 12 minutes in the NBA. As in professional play, a foul in the act of shooting is a two- or three-shot foul, depending on the value of the shot attempt, with one free throw being awarded if the shot is good.

If a player is injured upon being fouled and cannot shoot free throws, the offensive team may designate any player from the bench to shoot in the place of the injured player in college; in the NBA, the opposing team designates the player to shoot, and the injured player can't return, unless the foul committed was a flagrant-2, in which case the player's own team also gets to pick the replacement shooter. If a player fouled takes exception to the foul, and starts or participates in a fight, and gets ejected, he or she is not allowed to take his or her free throws, and the opposing team will choose a replacement shooter. In all other circumstances, the fouled player must shoot his or her own foul shots. 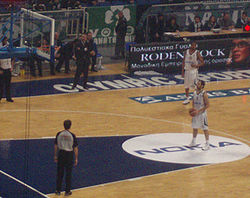 Finally, if a referee deems a foul extremely aggressive, or that it did not show an attempt to play the ball, the referee can call a even more severe foul, known as an unsportsmanlike foul in international play, a flagrant foul in the NBA, or an intentional foul in NCAA basketball. This foul is charged against the player (and depending on the severity of the offense, can even be ejected), and the opponent gets two free throws and possession of the ball afterwards. Unlike technical fouls, the player fouled must shoot the awarded free throws.

Fouls "away from the ball" (fouls that do not occur on the shooter or near the ball) are handled like the second case above in most situations. Many times defenders hold their opponent to prevent them from catching an in-bound pass or fight through screens and thus are called for fouls. These fouls are almost always treated as normal personal fouls. In the NBA, when there are only two minutes left on the clock of either half, off-ball fouls when the fouling team is over the limit are rewarded with one free throw and possession of the ball. It is therefore common for a losing team to deliberately single out its opponent's poor free-throwers, regardless of their dominance in other aspects of the game (as in the cases of Ben Wallace and of Shaquille O'Neal), as the targets of deliberate fouls until the two-minute mark, after which the losing team plays intense defense for the rest of the game (see Hack-a-Shaq). It is believed that this rule was instituted because of Wilt Chamberlain[citation needed]. Previously teams had been allowed to foul any player on the court regardless of whether that player had possession of the ball, with only two free throws awarded to the fouled player. This motivated teams to chase poor free-throw shooters, such as Chamberlain, around the court in attempt to foul him in an effort to extend the game. To discourage this practice, the NBA changed the rule to award one free throw and possession of the ball to a player who is fouled away from the ball in the last two minutes of the fourth quarter. This rule does not apply in international or NCAA play and in fact plays a very vital strategic role in the NCAA Tournament. 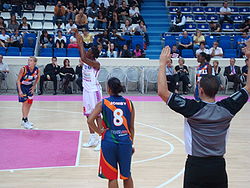 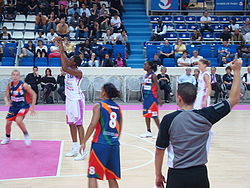 Free throws are organized in procession. The shooter takes his place behind the free throw line (19 feet from the base line, 15 feet from the basket). All other players must stand in their correct places until the ball leaves the shooter's hands:

Three people from the defensive team and two people from the shooting team line up along the sides of the restricted area (keyhole, paint, lane). These players are usually the ones that rebound the ball. Three line up on one side and two on the other. A defensive player always takes the place closest to the basket.

Under FIBA rules, if the shooter does not commit a violation, and the ball goes in the basket, the attempt is successful, regardless of violations committed by any non-shooter.

1 Penalty applies to fouls in excess of four in a regulation period or in excess of three in an overtime period. If a team has not committed its foul quota by the two minute mark of a period, it shall be allowed one foul before the penalty applies. Offensive fouls do not count toward this total.
2 Defensive fouls committed during a throw-in prior to the ball being released result in two free throws regardless of the penalty situation.
3 In the NBA, a team must have five players on the court at all times. If a team is down to five players because of injuries and players with six fouls, and a player commits his sixth foul, he remains in the game and a technical foul is charged. The technical foul penalty of one free throw and the ball applies.

Prior to the 1954-55 season, the NBA established the rule that a backcourt foul would result in a "three to make two" situation (up to three attempts to make two free throws) if the violating team was over the team foul limit.[4] By 1979, the rule had been extended to the penalty situation for flagrant fouls, fouls made in the act of shooting (resulting in a miss), and fouls due to the swinging of the elbows.[5] Prior to the 1981-82 season, this rule, as well as the related "two to make one" rule were abolished.[4]