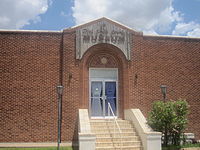 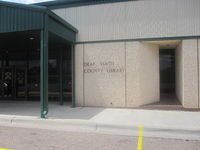 The Deaf Smith County Library formerly housed the National Cowgirl Hall of Fame on the ground floor. The museum is now located in a new building in the Historic District of Fort Worth, Texas. 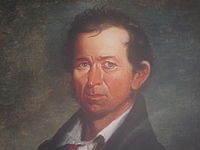 Deaf Smith County is a county located in the U.S. state of Texas. Mainly made up of farm land, its county seat is Hereford, known as the "Beef Capitol of the World", Hereford, TX. As of the 2000 census, the population was 18,561. [1].

In 1876 the state legislature identified and named the county, but it was not organized until 1890, with the town of LaPlata as the original county seat. The county was named for Erastus "Deaf" Smith (1787–1837), a partially-deaf scout and soldier who served in the Texas Revolution. The pronunciation of "Deaf", like that of Smith himself, is "Deef". He was the first to reach the Alamo after its fall. Most people in Deaf Smith County, however, pronounce it "Deaf."

This county was also selected as an alternate site for a possible nuclear waste disposal repository but was later dropped. Jesse Frank Ford, founder of Arrowhead Mills, led the opposition to the Deaf Smith site on grounds of contamination of the Ogallala Aquifer, the source of much of the water supply for West Texas.

Deaf Smith County has been ranked the 9th best place for less affluent Texans to live, according to Texas Home Quarterly.[citation needed]

The headquarters of the Deaf Smith Electric Cooperative are located in Hereford. The cooperative provides electricity for Deaf Smith County as well as Castro, Parmer and Oldham Counties.[3]