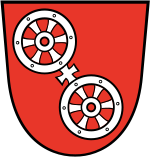 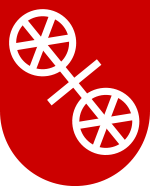 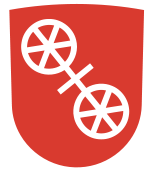 The Wheel of Mainz or Mainzer Rad, in German, was the coat of arms of the Archbishopric of Mainz and thus also of the Electorate of Mainz (Kurmainz), in Rhineland-Palatinate, Germany. It consists of a silver wheel with six spokes on a red background. The wheel can also be found in stonemasons' carvings (e.g. landmarks) and similar objects. Currently, the City of Mainz uses a double wheel connected by a silver cross.

The origins of the wheel are not known. One theory traces it back to Bishop Willigis, who was elected Archbishop of Mainz in 975. According to a tale delivered by the Brothers Grimm, his ancestors had been wheelwrights and his adversaries sneered at him for his mean birth. They drew wheels on the walls and doors of his residence, Willigis though made it his personal ensign with the motto "Willigis, remember where you came from". However, this is not proven, and in any case coats of arms only appeared in the 12th century. Most of the archbishops of Mainz used the wheel for the first and third field of their personal coat of arms, using their family's coat of arms for the second and forth fields.

It is more likely that the wheel refers to Saint Martin[2], the patron of both the city itself and of Mainz Cathedral. Insignia dating from 1300 depict the saint with both wheels. Moreover, the Archbishops of Mainz were sometimes referred to as the currum dei aurigantes ("Drivers of God's Chariot") and the currum ecclesiae Moguntinae aurigantes ("Charioteers of the Church of Mainz")[citation needed], to which the wheels may well also be a reference.

Other theories see the wheel as either: 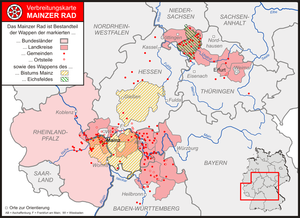 Dissemination of the Wheel of Mainz 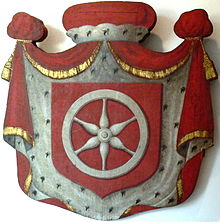 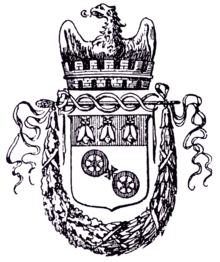 It also features in the arms of Rhineland-Palatinate itself.

Coats of Arms featuring the Wheel of Mainz

German municipal arms with wheels which have no connection to Mainz