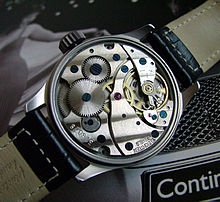 The movement of a Russian watch

A mechanical watch is a watch that uses a mechanical mechanism to measure the passage of time, as opposed to modern quartz watches which function electronically. It is driven by a spring (called a mainspring) which must be wound periodically. Its force is transmitted through a series of gears to power the balance wheel, a weighted wheel which oscillates back and forth at a constant rate. A device called an escapement releases the watch's wheels to move forward a small amount with each swing of the balance wheel, moving the watch's hands forward at a constant rate. This makes the 'ticking' sound characteristic of all mechanical watches. Mechanical watches evolved in Europe in the 17th century from spring powered clocks, which appeared in the 15th century.

Mechanical watches are not as accurate as modern quartz watches and are generally more expensive. They are now worn more for their aesthetic attributes, as a piece of jewellery and as a statement of one's personal style, than for their timekeeping ability. Mechanical movements can be repaired from scratch over centuries by able watchmakers. 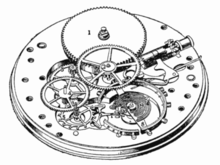 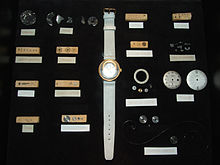 The internal mechanism of a watch, excluding the face and hands, is called the movement. All mechanical watches have these five parts:

Additional functions on a watch besides the basic timekeeping ones are traditionally called complications. Mechanical watches may have these complications: 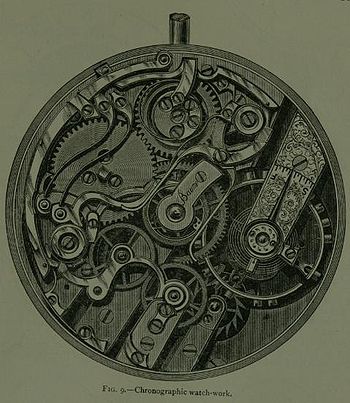 The movement of a chronograph pocketwatch from the 1880s.

The mechanical watch is a mature technology, and virtually all ordinary watch movements have the same parts and work the same way.[4]

The spiral mainspring that powers the watch is inside a cylindrical barrel, with the outer end of the mainspring attached to the barrel. The barrel has gear teeth around the outside that turn the center wheel once per hour — this wheel has a shaft that goes through the dial. On the dial side the cannon pinion is attached with a friction fit (allowing it to slide when setting the hands) and the minute hand is attached to the cannon pinion. The cannon pinion drives a small 12-to-1 reduction gearing called the motion work that turns the hour wheel and hand once for every 12 revolutions of the minute hand.

The balance wheel keeps time for the watch. It consists of a weighted wheel which rotates back and forth, which is returned toward its center position by a fine spiral spring, the balance spring. The mass of the balance wheel combines with the stiffness of the spring to precisely control the period of each swing or 'beat' of the wheel. Most watch balance wheels oscillate at 5, 6, 8, or 10 beats per second. In most watches there is a regulator lever on the balance spring which is used to adjust the rate of the watch. It has two curb pins which embrace the last turn of the spring, and can be slid up or down the spring to control its effective length. 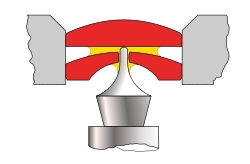 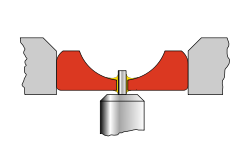 Jewel bearings were invented and introduced in watches by Nicolas Fatio (or Facio) de Duillier and Pierre and Jacob Debaufre around 1702[5][6] to reduce friction. They did not become widely used until the mid 19th century. Until the 20th century they were ground from tiny pieces of natural gems. Watches often had garnet, quartz, or even glass jewels; only top quality watches used sapphire, ruby, or diamond.[5] In 1902, a process to grow artificial sapphire crystals was invented, making jewels much cheaper. Jewels in modern watches are all synthetic sapphire or (usually) ruby, made of corundum (Al2O3), one of the hardest substances known. The only difference between sapphire and ruby is that different impurities have been added to change the color; there is no difference in their properties as a bearing.[7] The advantage of using jewels is that their ultrahard slick surface has a lower coefficient of friction with metal. The static coefficient of friction of steel-on-steel is 0.58, while that of sapphire-on-steel is 0.10-0.15.[8]

Why they are used

Jewels serve two purposes in a watch.[9] First, reduced friction can increase accuracy. Friction in the wheel train bearings and the escapement causes slight variations in the impulses applied to the balance wheel, causing variations in the rate of timekeeping. The low, predictable friction of jewel surfaces reduces these variations. Second, they can increase the life of the bearings. In unjeweled bearings, the pivots of the watch's wheels rotate in holes in the plates supporting the movement. The sideways force applied by the driving gear causes more pressure and friction on one side of the hole. In some of the wheels, the rotating shaft can eventually wear away the hole until it is oval shaped, and the watch stops.

In the escapement, jewels are used for the parts that work by sliding friction:[9]

Where they are used

The number of jewels used in watch movements increased over the last 150 years as jeweling grew less expensive and watches grew more accurate. The only bearings that really need to be jeweled in a watch are the ones in the going train - the gear train that transmits force from the mainspring barrel to the balance wheel - since only they are constantly under force from the mainspring.[13] The wheels that turn the hands (the motion work) and the calendar wheels are not under load, while the ones that wind the mainspring (the keyless work) are used very seldom, so they do not wear significantly. Friction has the greatest effect in the wheels that move the fastest, so they benefit most from jewelling. So the first mechanism to be jeweled in watches was the balance wheel pivots, followed by the escapement. As more jeweled bearings were added, they were applied to slower moving wheels, and jewelling progressed up the going train toward the barrel. A 17 jewel watch has every bearing from the balance wheel to the center wheel pivot bearings jeweled, so it was considered a 'fully jeweled' watch.[11] In quality watches, to minimize positional error, capstones were added to the lever and escape wheel bearings, making 21 jewels. Even the mainspring barrel arbor was sometimes jeweled, making the total 23. When self winding watches were introduced in the 1950s, several wheels in the automatic winding mechanism were jeweled, increasing the count to 25-27.

It is doubtful whether adding jewels in addition to the ones listed above is really useful in a watch.[14] It does not increase accuracy, since the only wheels which have an effect on the balance wheel, those in the going train, are already jeweled. Marine chronometers, the most accurate portable timepieces, often have only 7 jewels. Nor does jewelling additional wheel bearings increase the useful life of the movement; as mentioned above most of the other wheels do not get enough wear to need them.

However, by the early 20th century watch movements had been standardized to the point that there was little difference between their mechanisms, besides quality of workmanship. So watch manufacturers made the number of jewels, one of the few metrics differentiating quality watches, a major advertising point, listing it prominently on the watch's face. Consumers, with little else to go on, learned to equate more jewels with more quality in a watch. Although initially this was a good measure of quality, it gave manufacturers an incentive to increase the jewel count.

Around the 1960s this 'jewel craze' reached ridiculous heights, and manufacturers made watches with 41, 53, 75, or even 100 jewels.[13][14] Most of these additional jewels were totally nonfunctional; they never contacted moving parts, and were included just to increase the jewel count. For example the Waltham 100 jewel watch consisted of an ordinary 17 jewel movement, with 83 tiny pieces of ruby mounted around the automatic winding rotor.[15] In 1974, the International Organization for Standardization (ISO) in collaboration with the Swiss watch industry standards organization NIHS: Normes de l'Industrie Horlogère Suisse published a standard, ISO 1112, which prohibited manufacturers from including such nonfunctional jewels in the jewel counts in advertising and sales literature.

This put a stop to the use of totally nonfunctional jewels. However, some experts say manufacturers have continued to inflate the jewel count of their watches by 'upjeweling'; adding functional jeweled bearings to wheels that do not really need them, exploiting loopholes in ISO 1112.[14] Examples given include adding capstones to third and fourth wheel bearings, jeweling minute wheel bearings, and automatic winding ratchet pawls. Arguably none of these additions adds to the accuracy or longevity of the watch.

Peter Henlein has often been described as the inventor of the first pocket watch, the "Nuremberg egg", in 1510, but this claim appears to be a 19th century invention and does not appear in older sources.[16]

Until the quartz revolution of the 1960s, all watches were mechanical. Early watches were terribly imprecise; a good one could vary as much as 15 minutes in a day. Modern precision (a few seconds per day) was not attained by any watch until 1760, when John Harrison created his marine chronometers. Precision was attained as from 1854 first by the Waltham Watch Company, through the industrialisation of the manufacturing process of the movement part, in order to attain the necessary precision: they won a Gold Medal at the 1876 Philadelphia Centennial Exposition with a lot of watches taken at random out of the production line, showing the way to their peers in U.S.A. (eg Elgin Watch Company) and the worldwide watch industry.

Mechanical watches are powered by a mainspring. Because the mainspring provides an uneven source of power (its torque steadily decreases as the spring unwinds), watches from the early 16th century to the early 19th century featured a chain-driven fusee which served to regulate the torque output of the mainspring throughout its winding. Unfortunately, the fusees were very brittle, were very easy to break, and were the source of many problems, especially inaccuracy of timekeeping when the fusee chain became loose or lost its velocity after the lack of maintenance.

As new kinds of escapements were created which served to better isolate the watch from its time source, the balance spring, watches could be built without a fusee and still be accurate.

As manual-wound mechanical watches became less popular and less favored in the 1970s, watch design and industrialists came out with the Automatic Watch Movement. Whereas a mechanically-wound watch must be wound with the pendant or a levered setting, an Automatic watch does not require to be wound by the pendant, but by simply shaking the watch winds the watch automatically. The interior of an Automatic Watch houses a swiveling metal or brass "plate", that swivels on its axis when the watch is shaken horizontally.