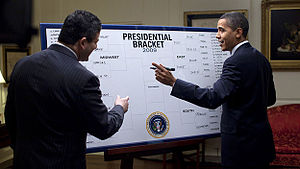 President Obama fills out his picks for the NCAA Men's Div I Tournament with ESPN's Andy Katz. President Barack Obama picked North Carolina to win the National Championship when he shared his "Barack-etology" with Katz on March 18, 2009. Other teams in his Final Four were Pittsburgh, Louisville, and Memphis.[1]

Andy Katz is a senior college basketball journalist for ESPN.com. He is a regular sports analyst on College GameNight on ESPN. Katz earned a B.A. at the University of Wisconsin–Madison (1990), and has worked for ESPN since January 5, 2000.[2]