The economy of Ethiopia is based on agriculture, which accounts for half of gross domestic product (GDP), 43% of exports, and 85% of total employment.

Ethiopia has - almost uniquely in Africa - virtually no private sector business at all.[3] There are no Patent Laws in Ethiopia.[4] Many government owned properties during the previous regime have now been transferred to pro-government enterprises in the name of privatization. Telecommunications remain a state monopoly, stifling the development of mobile phones that have become ubiquitous elsewhere in Africa.[citation needed] In financial services, no foreign banks are allowed and it remains almost impossible to find start-up loans for small and medium businesses. Youth unemployment is estimated to be as high as 70%. Because of population growth, just to stand still the country must produce hundreds of thousands of jobs every year.[3]

Furthermore, the Ethiopian constitution defines the right to own land as belonging only to "the state and the people", but citizens may only lease land (up to 99 years), and are unable to mortgage, sell, or own it.[5] Various groups and political parties have sought for full privatization of land, while other opposition parties are against privatization and favor communal ownership.

The current government has embarked on a program of economic reform, including privatization of state enterprises and rationalization of government regulation. While the process is still ongoing, the reforms have begun to attract much-needed foreign investment. Despite recent improvements, with an exploding population Ethiopia remains one of the poorest nations in the world.

The economy of Ethiopia is based on agriculture, which accounts for 46.3% of gross domestic product (GDP), 60% of exports, and 80% of total employment.

Ethiopia's agriculture is plagued by periodic drought, soil degradation caused by overgrazing, deforestation, high population density,[citation needed] high levels of taxation and poor infrastructure (making it difficult and expensive to get goods to market). Yet agriculture is the country's most promising resource. A potential exists for self-sufficiency in grains and for export development in livestock, grains, vegetables, and fruits. As many as 4.6 million people need food assistance annually.

Agriculture accounts for almost 41 percent of the gross domestic product (GDP), 80 percent of exports, and 80 percent of the labour force. Many other economic activities depend on agriculture, including marketing, processing, and export of agricultural products. Production is overwhelmingly of a subsistence nature, and a large part of commodity exports are provided by the small agricultural cash-crop sector. Principal crops include coffee, pulses (e.g., beans), oilseeds, cereals, potatoes, sugarcane, and vegetables. Exports are almost entirely agricultural commodities, with coffee as the largest foreign exchange earner, and its flower industry becoming a new source of revenue: for 2005/2006 (the latest year available) Ethiopia's coffee exports represented 0.9% of the world exports, and oilseeds and flowers each representing 0.5%.[6] Ethiopia is Africa's second biggest maize producer.[7] In 2000, Ethiopia's livestock contributed to 19% of total GDP.[8]

As of 2008[update], some countries that import most of their food, such as Saudi Arabia, had begun planning the development of large tracts of arable land in developing countries such as Ethiopia.[9] This has raised fears of food being exported to more prosperous countries while the local population faces its own shortage.[9]

This sector constitutes about 4 percent of the overall economy, although it has shown some growth and diversification in recent years. Much of it is concentrated in Addis Ababa. Food and beverages constitute some 40 percent of the sector, but textiles and leather are also important, the latter especially for the export market. A program to privatize state-owned enterprises has been underway since the late 1990s.[10]

Aside from wholesale and retail trade, transportation, and communications, the services sector consists almost entirely of tourism. Developed in the 1960s, tourism declined greatly during the later 1970s and the 1980s under the military government. Recovery began in the 1990s, but growth has been constrained by the lack of suitable hotels and other infrastructure, despite a boom in construction of small and medium-sized hotels and restaurants, and by the impact of drought, the recent war with Eritrea, and the specter of terrorism. In 2002 more than 156,000 tourists entered the country, many of them Ethiopians visiting from abroad, spending more than US$77 million.[10] In 2008, the number of tourists entering the country had increased to 330,000.[11]

The mining sector is quite small in Ethiopia. The country has deposits of coal, opal, gemstones, kaolin, iron ore, soda ash, and tantalum, but only gold is mined in significant quantities. In 2001 gold production amounted to some 3.4 tons.[10] Salt extraction from salt beds in the Afar Depression, as well as from salt springs in Dire and Afder woredas in the south, is only of internal importance and only a negligible amount is exported.

Aside from waterpower and forests, Ethiopia is not well endowed with energy sources. The country derives about 90 percent of its electricity needs from hydropower, which means that electricity generation, as with agriculture, is dependent on abundant rainfall. Present installed capacity is rated at about 2000 megawatts, with planned expansion to 10,000 megawatts. In general, Ethiopians rely on forests for nearly all of their energy and construction needs; the result has been deforestation of much of the highlands during the last three decades.[10]

Less than one-half of Ethiopia’s towns and cities are connected to the national grid. Petroleum requirements are met via imports of refined products, although some oil is being hauled overland from Sudan. Oil exploration in Ethiopia has been underway for decades, ever since Emperor Haile Selassie granted a 50-year concession to SOCONY-Vacuum in September 1945.[12] Plans are afoot to exploit natural gas reserves in the southeastern lowlands, estimated at 4 trillion cubic feet (110×10^9 m3). Exploration for gas and oil is underway in the Gambela Region bordering Sudan.[10]

Prior to the outbreak of the 1998–2000 Ethiopian–Eritrean war, landlocked Ethiopia mainly relied on the seaports of Asseb and Massawa in Eritrea for international trade. As of 2005[update], Ethiopia uses the ports of Djibouti, connected to Addis Ababa by the Addis Ababa - Djibouti Railway, and to a lesser extent Port Sudan in Sudan. In May 2005, the Ethiopian government began negotiations to use the port of Berbera in Somaliland. Of the 23,812 kilometres of Ethiopia's all-weather roads, 15% are asphalt. Mountainous terrain and the lack of good roads and sufficient vehicles make land transportation difficult. However, the government-owned airline is excellent. Ethiopian Airlines serves 38 domestic airfields and has 42 international destinations. 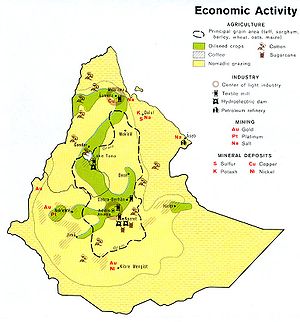 Map of economic activities in Ethiopia and Eritrea (1976)

The following table displays the trend of Ethiopia's gross domestic product at market prices, according to estimates by the International Monetary Fund with figures in millions of Ethiopian Birr.[13]

The major agricultural export crop is coffee, providing about 26.4% of Ethiopia's foreign exchange earnings. Coffee is critical to the Ethiopian economy. More than 15 million people (25% of the population) derive their livelihood from the coffee sector.[15]

Other exports include live animals, leather and leather products, chemicals, gold, pulses, oilseeds, flowers, fruits and vegetables and khat (or qat), a leafy shrub which has psychotropic qualities when chewed.

Cross-border trade by pastoralists is often informal and beyond state control and regulation. However, in East Africa, over 95% of cross-border trade is through unofficial channels and the unofficial trade of live cattle, camels, sheep and goats from Ethiopia sold to Somalia, Kenya and Djibouti generates an estimated total value of between US$250 and US$300 million annually (100 times more than the official figure).[16] This trade helps lower food prices, increase food security, relieve border tensions and promote regional integration.[16] However, there are also risks as the unregulated and undocumented nature of this trade runs risks, such as allowing disease to spread more easily across national borders. Furthermore, the government of Ethiopia is purportedly unhappy with lost tax revenue and foreign exchange revenues.[16] Recent initiatives have sought to document and regulate this trade.[16]

Dependent on a few vulnerable crops for its foreign exchange earnings and reliant on imported oil, Ethiopia lacks sufficient foreign exchange. The financially conservative government has taken measures to solve this problem, including stringent import controls and sharply reduced subsidies on retail gasoline prices. Nevertheless, the largely subsistence economy is incapable of supporting high military expenditures, drought relief, an ambitious development plan, and indispensable imports such as oil and, therefore, must depend on foreign assistance.

In December 1999, Ethiopia signed a $1.4 billion joint venture deal with the Malaysian oil company, Petronas, to develop a huge natural gas field in the Somali Region. By the year 2010, however, implementation failed to progresse and Petronas sold its share to another oil company.[17]