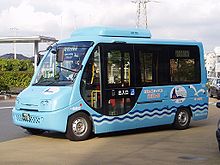 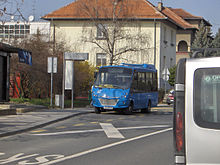 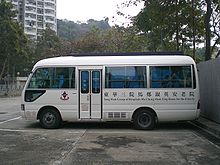 A minibus or minicoach is a passenger carrying motor vehicle that is designed to carry more people than a multi-purpose vehicle or minivan, but fewer people than a full-size bus. In the United Kingdom, the word "minibus" is used to describe any full-sized passenger carrying van. Minibuses have a seating capacity of between 8 and 30 seats. Larger minibuses may be called midibuses. Minibuses are typically front-engined step-entrance vehicles, although low floor minibuses do exist.

There are many different types and configurations of minibuses, due to historical and local differences, and usage. Minibus designs can be classified in three main groups, with a general increase in seating capacity with each type:

The most basic source of minibus is the van conversion, where the minibus is derived by modifying an existing van design. Conversions may be produced completely by the van manufacturer, sold as part of their standard model line-up, or be produced by specialist conversion companies, who source a suitably prepared base model from the van manufacturer for final completion as a minibus.

Van conversions involve adding windows to the bodywork, and seating to the cargo area. Van conversion minibuses outwardly look the same shape as the parent van, and the driver and front passenger cabin remains unchanged, retaining the driver and passenger doors. Access to the former cargo area for passengers is through the standard van side sliding door, or the rear doors. These may be fitted with step equipment to make boarding easier. Optional extras to van converted minibuses can include the addition of a rollsign for transit work, and/or a full-height walk-in door, for passenger access to the former cargo area. For public transport use, this door may be an automatic concertina type. For other uses, this may be a simple plug style coach door. Depending on the relevant legislation, conversions may also involve wheelchair lifts and tachograph equipment. A van conversion with a passenger area in the front and a storage area in the back, behind a fixed bulkhead, is called a splitter bus.

Examples of vans used for these conversion minibuses are: 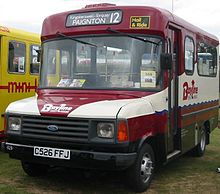 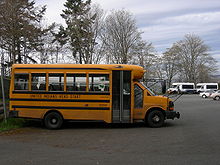 In a body-on-chassis minibus, a cabin body is installed on a van or light truck chassis encompassing the drivers area. These designs may retain some outward signs of the original van, such as the hood and grill. Other designs are visually a complete bus design, and it is merely the chassis underneath that is from the van design.

The body-on-chassis approach gives the advantage of higher seating capacity, or more room for passenger comfort, through a larger cabin area. There is also the advantage of being able to have the drivers seat positioned in a small cubicle, next to the main passenger entrance, allowing the driver to collect fares in a transit bus role.

Examples of body built minibuses are:

Examples of vehicles used for this type of minibuse are:

A next generation approach to the van-derived or cutaway chassis approach, is for manufacturers to produce an integral design, where the whole vehicle is purposely designed and built for use as a minibus. This is usually done by an integral bus manufacturer, although large automotive groups also produce their own models. These designs are often available in long high capacity versions, and may attract different designations, such as midibus, or light bus.

Examples of purpose built minibuses are: 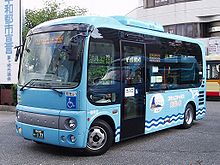 Following the invention of low-floor technology, some low-floor purpose built minibuses have been created. Some offer a low floor access through a centre door. Some short versions of low floor midibuses are sometimes also called minibuses.

Some countries may require an additional class of driving licence over a normal private car licence, and some may require a full commercial driver's license. The need for such a license may depend on: