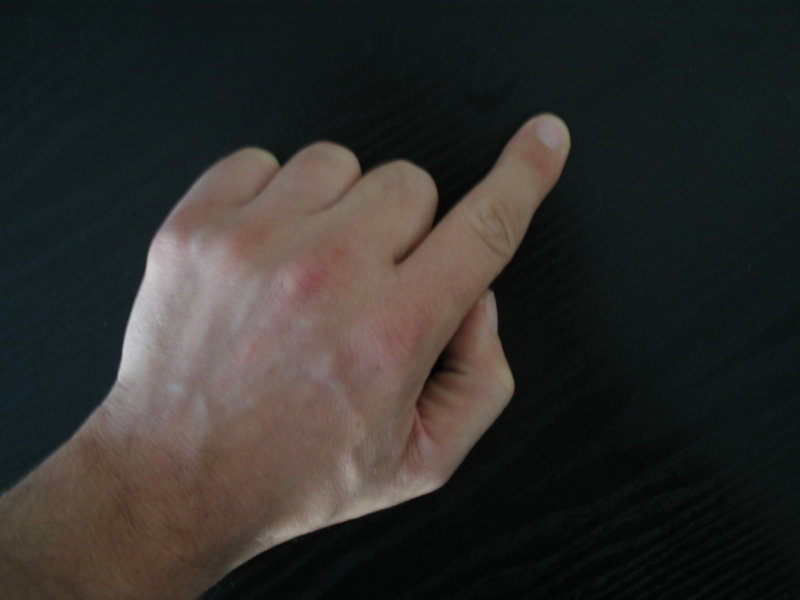 It is located between the first and third digits - that is, between the and the . It is usually the most dextrous and sensitive of the hand, though not the longest. A lone index finger often is used to represent the 1, or when held up or moved side to side (finger-wagging), it can be an admonitory gesture. With the hand held palm out and the thumb and middle fingers touching, it represents the letter "d" in the . In , it can also represent victory, as some -winning teams raise their index finger (often saying "We're number one!") while posing for a championship team photo.

Studies have also found that a smaller index finger compared with the indicates a better athlete. [ [http://www.news.com.au/story/0,23599,20490243-13762,00.html News.com.au report] ] Men are 2.5 times more likely than women to have an index finger which is shorter than their ring finger, and such ratios correlate with an increased likelihood of , especially for women with such ratios. [Arthritis & Rheumatism. news release, Jan. 2, 2008]

As mentioned above, the forefinger can be used for pointing. However, this is considered rude in some countries (, and for instance), in the former two pointing with the whole hand is considered polite.

During the , Serbo-Bosnian troops raised three fingers in a sign of victory, s raised the two-finger and Muslims () raised one (after the strict monotheism of Islam).