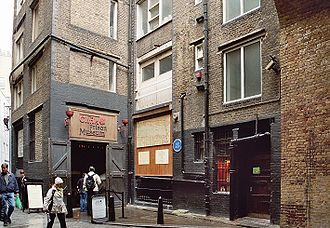 Entrance to The Clink prison museum

The Clink was a notorious prison in Southwark, England which functioned from the 12th century until 1780 either deriving its name from, or bestowing it on, the local manor, the Clink Liberty (see also the Liberty of the Clink). The manor and prison were owned by the Bishop of Winchester and situated next to his residence at Winchester Palace. The Clink was possibly the oldest men's prison and probably the oldest women's prison in England.[1]

The origins of the name "The Clink" are uncertain, but it is possibly onomatopoeic and derives from the sound of striking metal as the prison's doors were bolted, or the rattling of the chains the prisoners wore.

The name has come into use in British slang as a generic term for prison or a jail cell.[2] 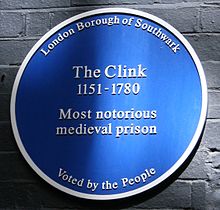 Blue plaque on the site

There has been a prison owned by the Bishop of Winchester in one form or another since the year 860, although at that time it would only have been one cell in a priests college. By 1076 an Archbishop had listed the type of punishments allowed, scourging with rods, solitary confinement, and bread and water in silence.[3]

The building of a chapel and mansion at Southwark was begun in 1107 by the then current Bishop of Winchester, but was not completed until 1144, by his successor. There were two prisons included, one for men and one for women. It would have been a good source of income for the Bishop, as it was about this time that the brothels were regulated, bringing in plenty of fines and customers. The brothels were closed, reopened, moved and used throughout the life of the Clink, bringing in prisoners at a fairly steady rate. By 1180 the land was owned outright by the Clink prison.

The prisoners were ill treated although those with money and friends on the outside were able to pay the gaolers to make their time better. As the gaolers were very poorly paid, they found other ways to supplement their income. They hired out rooms, beds, bedding, candles and fuel to those who could afford it. Food and drink were charged at twice the correct price. They accepted payments for fitting lighter irons and for removing them completely. For a fee, prisoners would be allowed outside to beg or even to work. Madams were allowed to keep a brothel going, with payments going to the gaolers[4]. Poorer prisoners had to beg at the grates that led up to street level and sell anything they had with them, including their clothes to pay for food.

In 1450 rioters protesting the Statute of Labourers raided Winchester House. Classing clerics as tax collectors, they murdered them, and released prisoners from the Clink before burning it down. The rebellion was put down and Winchester House was rebuilt and extended, including a new prison.

In 1649 Winchester House was sold to a property developer and was divided into shops, tenements and dye houses. The Cage was removed temporarily as ratepayers had complained about the cost of upkeep, but the whipping post was still busy. By 1707 both of these and the stocks were all unused because of the cost of upkeep, and by 1732 there were only two registered inmates. In 1745 a temporary prison was used as the Clink was too decayed to use, although by 1776 the prison was again taking in debtors. It was burnt down in 1780 by Gordon riotors, and was never rebuilt.

The Clink Prison Museum is currently located on the original site in Clink Street, in the basement of a former warehouse. The museum tries to recreate the conditions of the original prison.