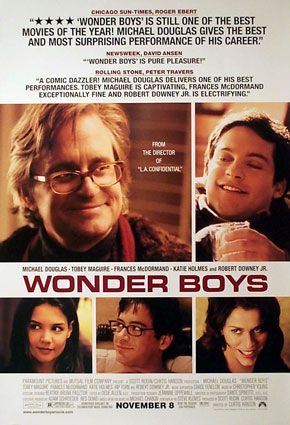 "Wonder Boys" is a 2000 based on the 1995 novel of the same title by . Directed by , it stars as professor Grady Tripp, a novelist who teaches creative writing at an unnamed Pittsburgh university. He has been unable to finish his second novel, his young wife has left him, and he is sleeping with his boss’ wife (), who is also the Chancellor of the university. Grady's editor () is in town to take a look at the book and becomes interested in a book that a student () from Grady's creative writing class has just completed.

"Wonder Boys" was filmed in , including locations at , , and . Other Pennsylvania locations included Beaver, Rochester and Rostraver Township. The film reunited Holmes and Maguire, who had appeared together three years earlier in "The Ice Storm".

After "Wonder Boys" failed at the box office, there was a second attempt to find an audience with a new marketing campaign and a , 2000, re-release, which was also a financial disappointment.

Professor Grady Tripp () is a novelist who teaches creative writing at an unnamed Pittsburgh university (the movie was shot in and around ). He is having an affair with the university chancellor, Sara Gaskell (), whose husband Walter is the chairman of the English department, and thus Grady's boss. Grady's third wife, Emily, has just left him, and he has failed to repeat the success of his first novel, published years earlier. He continues to labor on a second novel, but the more he tries to finish it the less able he finds himself to invent a satisfactory ending - the book runs to a couple thousand pages and is still far from finished. He spends his free time smoking .

His students include James Leer () and Hannah Green (). Hannah and James are friends and both very good writers. Hannah, who rents a room in Tripp's large house, is attracted to Tripp, but he does not reciprocate. James is enigmatic, quiet, dark and enjoys writing more than he first lets on.

During a party at the Gaskells' house, Sara reveals to Grady that she is pregnant with his child. Grady finds James standing outside holding what he claims to be a replica gun, won by his mother at a fairground during her schooldays. However, the gun turns out to be very real, as James shoots the Gaskells' dog when he finds it attacking Grady. James also steals a very valuable piece of memorabilia from the house. Grady is unable to tell Sara of this incident as she is pressuring him to choose between her and Emily. As a result, Grady is forced to keep the dead dog in the trunk of his car for most of the weekend. He also allows James to follow him around, fearing that he may be depressed or even suicidal. Gradually he realizes that much of what James tells him is untrue, and is designed to elicit Grady's sympathy.

Meanwhile, Grady's editor, Terry Crabtree (), has flown into town on the pretense of attending the university's annual WordFest, a literary event for aspiring authors. In reality, Crabtree is there to see if Tripp has written anything worth publishing, as both men's careers depend on Grady's book. Terry arrives with a transvestite whom he met on the flight, called Antonia Sloviak (Michael Cavadias). The pair apparently become intimate in a bedroom at the Gaskells' party, but immediately afterwards Terry meets, and becomes infatuated with, James Leer, and Sloviak is unceremoniously sent home. After a night on the town, Crabtree and James semi-consciously flirt throughout the night, which eventually leads up to the two end up spending an awkwardly intimate night together in one of Grady's spare rooms.

Tired and confused, Grady phones Walter Gaskell (Richard Thomas) and reveals to him that he is in love with Walter's wife. Meanwhile, Walter has also made the connection between the disappearance of Marilyn Monroe's jacket and James Leer. The following morning a policeman arrives with Sara to escort James to the Chancellor's office to discuss the ramifications of his actions. The jacket is still in Grady's car, which has conspicuously gone missing. This car had been given to him by a friend as payment for a loan, and over the weekend Grady has come to suspect that the car was stolen. Over the course of his travel around town, Grady has been repeatedly accosted by a man claiming to be the car's real owner. Using his writer's sense of creativity and much to Crabtree's astonishment, he eventually tracks the car down, but in a dispute over its ownership the majority of his manuscript blows out of the car and is lost. The car's owner gives him a ride to the university with his wife, Oola, in the passenger seat, wearing the stolen jacket.

Remembering James Leer's distress at how lonely the jacket looked in its own special closet, Grady finally sees that making things right involves having to make choices. Grady tells Oola the story behind the jacket and allows her to leave with it, symbolically filling the void that possessed James and himself. Worried that Grady's choice comes at the expense of damaging James Leer's future, Crabtree asks Professor Tripp what's to be done about the theft. Grady gives Terry the simple advice to improvise. Terry takes the advice and convinces Walter not to press charges by agreeing to publish his book, "a critical exploration of the union of Joe DiMaggio and Marilyn Monroe and its function in American mythopoetics", tentatively titled "The Last American Marriage".

The movie ends with Grady recounting the eventual fate of the main characters - Hannah graduates and becomes a magazine editor; James wasn't expelled, but drops out anyway and moves to New York with Crabtree to rework his novel for publication; and Crabtree himself "goes right on being Crabtree." Grady finishes typing his new novel (now using a computer rather than a typewriter), then watches Sara and their child arriving home before turning back to the computer and clicking "Save."

After "L.A. Confidential", Curtis Hanson was working on a screenplay of his own and reading other scripts with a keen interest for his next film.

was not interested in making a quirky, character-driven comedy/drama until Douglas agreed to work well below his usual large fee. The actor gained 25 pounds for the film by eating pizza, subs and drinking a lot of beer.

Robert Downey Jr. was on probation during the winter of 1999 when Hanson considered him for a role in "Wonder Boys".

"Wonder Boys" was filmed in Pittsburgh, including locations at Carnegie Mellon University, Chatham College, and Shady Side Academy. Other Pennsylvania locations included Beaver, Rochester, and Rostraver Township. Hanson felt that Pittsburgh was "right, emotionally and thematically" for the film. The city was experiencing a mild winter during the film's shoot and they had to use a lot of artificial snow. 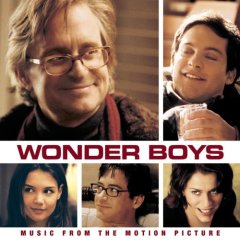 Released = ,
Recorded = 2000
Genre = Soundtrack
Length = 51:46
Label =
Producer =
Reviews = * Rating|4|5 [http://www.allmusic.com/cg/amg.dll?p=amg&sql=10:0vfixqrkld6e link]
Last album =
This album =
Next album =Hanson had been a fan of Bob Dylan's music since childhood and a great admirer of his soundtrack for "". Dylan admired Hanson's previous film, "L.A. Confidential" and after much convincing, screened 90 minutes of rough footage from "Wonder Boys". Hanson picked Dylan because, as he said, "Who knows more about being a Wonder Boy and the trap it can be, about the expectations and the fear of repeating yourself?"

In addition to Dylan, Hanson built the score around nine singer-songwriters including and . The entire soundtrack is integrated into the film with Hanson playing some of the songs for the actors on the Pittsburgh set to convey a scene's "aural texture", as he put it. The soundtrack features several songs by , including one new composition, "Things Have Changed". Hanson also created a music video for the song, filming new footage of Bob Dylan on the film's various locations and editing it with footage used in "Wonder Boys" as if Dylan were actually in the film. According to Hanson, "Every song reflects the movie's themes of searching for past promise, future success and a sense of purpose".

"Wonder Boys" currently holds an 83 percent "fresh" rating at and a 73 metascore at . , a film critic of the "", praised "Wonder Boys" as "the most accurate movie about campus life that I can remember. It is accurate, not because it captures intellectual debate or campus politics, but because it knows two things: (1) Students come and go, but the faculty actually lives there, and (2) many faculty members stay stuck in graduate-student mode for decades."